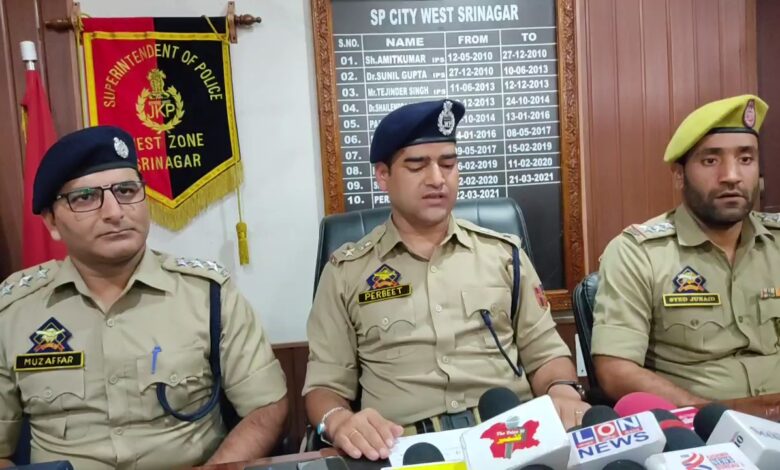 Police had received a couple of complaints from West area of city, wherein complainants had claimed that their houses were looted during cordon and search operation by men donning army uniforms.

One such complaint was received by police station Parimpora from a local of Maloora HMT wherein he claimed that a group of people donning combat uniforms raided his house and during the raid, gold, cash and cell phones were looted.

Divulging information about these incidents, SP West Perbeet told reporters that one such incident occurred in Maloora area on 4 May this year.

“We registered a formal FIR vide number 107/2021 to investigate the matter. In the meantime, another similar incident during the intervening night of 7 and 8 July occurred in Hokarsar area. Subsequently, a Special Investigation Team led by SDPO West Muzaffar Jan and SHO Parimpora Police Station Syed Junaid was constituted,” SP said.

SP Perbeet said that with the help of technical data, the SIT zeroed in on some suspects who were arrested during multiple raids. These suspects confessed their involvement in these burglary incidents,” he said.

The SP West while talking about the modus operandi of this gang said that they used to target those houses where marriage ceremonies were taking place or where marriages had already been solemnized. This they were doing just to loot more gold and cash.

“We have arrested 10 members of the gang. More arrests and recoveries are expected in coming days,” the police officer said.

He said the gang members after donning combat uniforms used to enter the house, locking up all the family members on the pretext of a search operation, snatch their cell phones and loot cash and gold.

“We have recovered gold ornaments worth 22 lakh, cash 3.50 lakh, a vehicle which they had purchased from the stolen money, 6 combat dresses, 5 dummy AK-47 rifles, 4 dummy pistols and some iron rods which they used to break the locks,” SP Perbeet said.

He said all the members who have been arrested so for are the locals from Central Kashmir’s Budgam district. knt