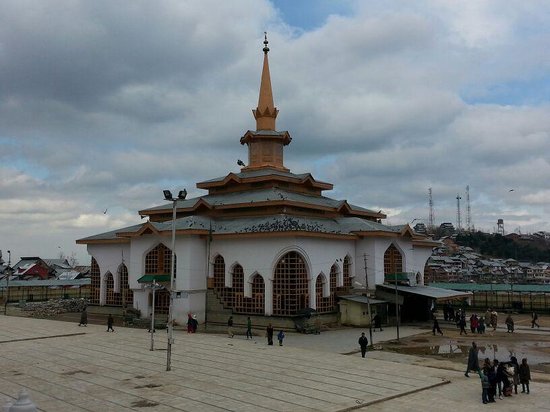 Budgam, Aug 06: Much to the annoyance of thousands of devotees, the authorities in Central Kashmir’s Budgam district on Friday closed the Grand mosque at the revered shrine of Hazrat Sheikh Noordin Noorani (RA) Charar-e-Shareef for mass gatherings.

Official sources said that the mosque was closed by authorities after experts found cracks in the masjid.

“With reference to the above captioned subject and reference, a joint team of experts from NIT Srinagar and JKPCC visited the site of the Khankah (Mosque) at Charar-e-Shareef on June 12, the team from NIT Srinagar started with a keen visual inspection of the entire mosque in order to review the layout and to identify the affected critical area.”

The letter further reads: “This was followed by thorough non-destructive testing of the affected portion of the structure. Consequently, the dimensions of the existing structure were taken and cross-referenced with the architectural drawings facilitated by the officials of KPCC. The dimensions of the existing structure were found to adhere with the drawings, it may kindly be noted that during visual inspection of the first story slab of the affected portion of the structures as seen from ground story, some visually observable cracks were noticed in the secondary beams of the coffer slab at multiple locations of which photographs evidence has been kept for records.”

The letter further reads that it is pertinent to add here that the department is still in the process of analysing the detailed drawings and design calculation facilitated by the JKPCC officials before coming up with a corrective or remedial solution, if any, required for the building to perform better in its service life.

“In the meantime, it is recommended that the structure under reference should not be thrown open to mass gatherings,” the letter states, adding that “Similarly a letter was issued by Deputy General Manager, Unit Budgam JKPCC Ltd to the district development commissioner Budgam under subject, safety audit of Khankah Masque at Charar-e-Shareef, which reads, “Enclosed kindly find herewith letter No: 480 dt 07/07/2021 from O/C Structures from Department of Civil Engineer, National Institute of Technology Srinagar(Copy enclosed). The NIT authority are analysing the detailed design calculations to provide remedy for Safety Audit.”

The letter reads that in the meantime as reported by the NIT authority, that the “caretakers of the said mosque (Khanqah) may be directed to avoid mass gatherings.”

The last letter was issued by Joint Director Chief Planning Officer, Budgam from the office of district development commissioner Budgam to the Chairman, Waqaf Board, Charar-e-Sharief under subject Subject: “Safety Audit of Khanqah (Mosque) at Charar-e-sharief Instructions thereof.”

It reads that, “Kindly refer to the above captioned subject. In this connection, I am directed to enclose herewith a report received from National Institute of Technology (copy enclosed) regarding the subject cited above wherein it has been reported that the caretakers of the Khanqah (Mosque) should avoid mass gatherings in the mosque and necessary measures may be taken accordingly.”

When contacted Abdul Salaam, Administrator, Muslim Waqf Board Unit Charar-e-Sharif  said: “The mosque was closed for prayers after a team of experts declared it unsafe for mass gatherings. As of now we have locked the main entrance of the mosque, as the concerned authorities including SDM Chadoora, Waqf Board, and JKPCC officials have called for a meeting on Wednesday to discuss the further road map.” Adding that the mosque will remain closed until any further decision.”

The Masjid was built by JKPCC at the cost of Rs 33 crore, but with increasing low quality construction material and the then government’s apathy, devotees say any further negligence by the concerned authorities will only pave way for any big incident.

“This mosque is being taken care of by the Waqf Board. It exists in the heart of the model town, but I do not hold out much hope because of the constant neglect by the authorities. A team of experts from NIT Srinagar and JKPCC had inspected the mosque and taken note of all the mosque cracks. Unfortunately, no concrete steps have been taken till now for its restoration but it has been closed,” said a local resident of the area.

Another devotee told KNO that it needs to be repaired immediately. “The mosque is in such a condition due to official apathy. The pathetic state of the this Mosque needs to be taken seriously,” the locals said. kno