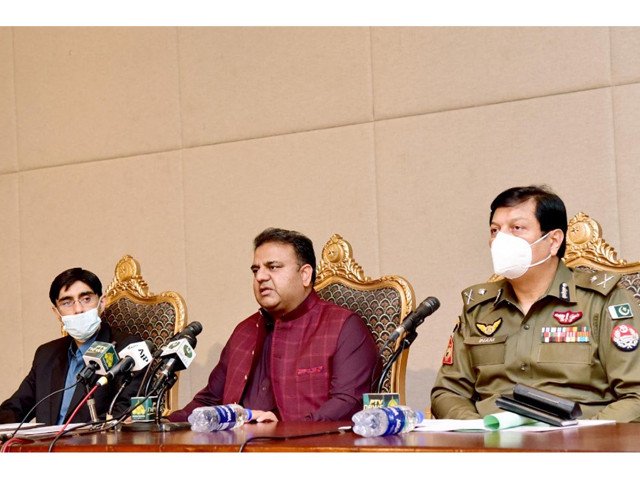 ISLAMABAD: Pakistan has accused India of orchestrating Lahore terrorist attack during which three people were killed and many in injured.

“I want to make sure that our message is heard very clearly that this particular incident on 23rd of June in Lahore we have concrete evidence and intelligence including financial and telephone records that point to direct Indian sponsorship of these terrorists,” revealed by National Security Adviser (NSA) Dr Moeed Yousaf at a joint news conference with Information Minister Fawad Chaudhry and Punjab Police IG Inam Ghani on Sunday, The Express tribune reported.

On June 23, a powerful blast near the residence of banned Jamaatud Dawa chief Hafiz Saeed in Johar Town had killed three people and injured 24 others, including a police constable.

Sharing details of the investigations, Moeed said Pakistan had identified the main mastermind and the handlers through “forensic analysis, electronic equipment which has been recovered from these terrorists.”

“We have identified the main mastermind and the handlers of this terrorist attack and we have absolutely no doubt or reservation in informing you that the main mastermind belongs to RAW, the Indian intelligence agency, is an Indian national and is based in India,” Moeed said.

“I would also like to say that very unusually we have evidence of thousands of attempts of cyber attacks against our critical investigative infrastructure right after this attack on 23rd June in Lahore.”

“These attacks and the number and sophistication in some cases leave no doubt the state sponsorship and state linkage in this case. Our cyber security is strong enough that we were able to thwart these attempts,” Moeed added.

The NSA also said the India “drama” of drone attack in Indian Administered Jammu and Kashmir was an attempt to divert attention from the Lahore attack.

“I would also like to point out there has been a whole drama about some mysterious drones flying here and there in IIOJK. What was the logic is now very clear and again with confidence we can put it out that was deflection tactic trying to divert the attention of the world from the fact and they knew at that time we have not only apprehended culprits but we knew exactly what it had been done behind the scene and who was behind it.”

The NSA further said India had been using territory and people of “third countries” to carrot terrorist attacks in Pakistan, although he did not mention those countries by name.

He told that the terror financing, made to execute the Lahore Blast, links were directly originating from India where the money was transferred through third country to Pakistan.

Moeed said India state sponsorship of terrorism in Pakistan was not new as the country in November last year presented a detailed dossier against New Delhi.

“European DisInfo Lab report [which is] an international reputed organisation showed how hundreds and thousands of fake outlets were being used to malign Pakistan, to spread misinformation about Pakistan and to hide what is actually a clear terrorist sponsorship by a state against the state in our region.

While commenting on the main suspect Eid Gul who parked the car in Johar Town, the NSA said the man was of Afghan origin and had been raised in Pakistan possessing a local national identity card being issued to Afghan refugees

“Let me also say the main executor Eid Gul has an Afghan origin, was here lived in Pakistan executed this attack and we as a state of Pakistan has been constantly telling this to the world that millions of law abiding Afghan refugees are given a bad name and Pakistan is blamed when these actors go and hide in these refugee settlements and then Pakistan is questioned why 1 or 2 or 3 people who are terrorists who are miscreants could not be apprehended.

“We have been constantly reminding the world of their duty to find a way for dignified return of all Afghan refugees and then question what we were asked.”

Moeed further said the prime minister had instructed his team to use all possible political and legal means to get to the people outside Pakistan who were part of this international terrorist network.

“We therefore sharing all the evidence with the international community and exposing the nefarious and real face of a state in our neighbourhood that has constantly sponsored terrorism against our innocent civilians,”

“Finally, I think it is high time that the international community stop turning a blind eye and play a constructive and the legally binding role for the safety of innocent Pakistanis if they really serious about peace and stability in this region,” he said.

“Pakistan will not remain silent on its people’s death and if the international community remains silent then they don’t have interest in peace,” Dr Moeed said

He added that if the Financial Action Task Force (FATF) was apolitical forum then it should hold India accountable for terror financing. (The Express tribune)