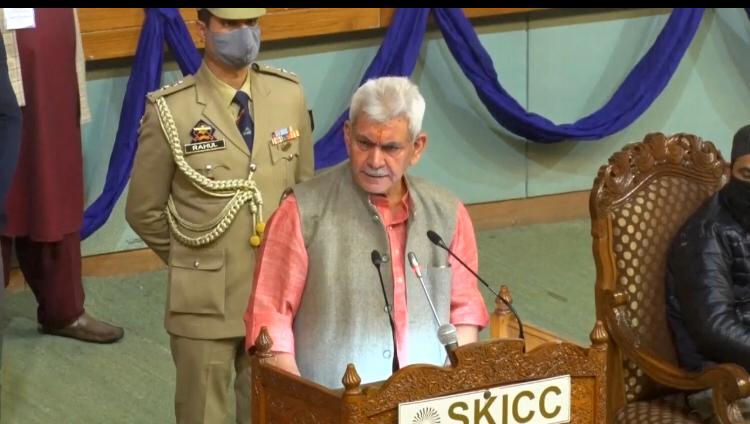 While addressing the summit, the Lt Governor said that any challenge can be met by strengthening the community participation and equity. “Whether it is a natural disaster or a man-made crisis, the community will have to be empowered and made self-reliant for it and that can be done by strengthening the health and economic security. We are making sure that transparent, accessible, and responsive governance works for the upliftment of every citizen of J&K”, the Lt Governor added.

Underlining the importance of the policy of ‘People First’ in political, economic, and social institutions for success of any system, the Lt Governor said that Emergency Health Response is short-term but the policies that are made during the same period always prepare a new road map for long-term development.

In today’s time, humanity is continuously engaged in reconstruction. People in the field of science and technology are working hard. Some actions may not be visible, but their effect will soon be in front of all of us, the Lt Governor observed.

Emphasizing the importance and immense potential of science, the Lt Governor said that the biggest lesson the pandemic has taught us is that no country can afford to remain in isolation, away from science. We all have to face the challenges together, through our strengths.

“The amount of work done in the health sector across the world in one year has never happened in human history. The way the whole world is working together to save lives is living example of compassionate humanity”, he added.

While lauding the roles of Frontline warriors and Healthcare workers, the Lt Governor said that doctors, nurses, ward boys, ambulance drivers, people working in oxygen plants, ASHA and ANM personnel, scientists, engineers, public representatives of PRIs, social workers, professionals who were trying to reach out to the needy, transcending boundaries across the country physically and through social media, worked with great determination and selflessness.

The Lt Governor said that people have realized that there are heroes in real life too and they are the personnel related to Healthcare sector. People saw the reflections of the angels in the faces behind the PPE kits.

Referring to a Shloka in Brihadaranyaka Upanishad, the Lt Governor said that the only way to remove darkness is to strengthen the capacity to see the light.

“The light that we saw in this tragedy is not only because of medicine, oxygen, vaccine, but because of the efforts of the people who are behind it, our corona warriors, front line workers, scientists, and engineers”, remarked the Lt Governor.

The Lt Governor said that the whole world is navigating through a crisis. It has, however, come at a time when science and technology is at the peak of its exploration. It is in less than a year that a vaccine was invented and governments were able to mobilize more facilities for the treatment of the people.

Expounding on the three things important for any nation or province after a crisis viz. – Response, Recovery, and Rebuilding, the Lt Governor said that we started working on it since August last year. Effectively utilizing the time before the start of the second wave, 23 oxygen plants were installed within 6 months. Eventually, there was no shortage of medical oxygen in Jammu and Kashmir even in the terrible tragedy of the second wave. We have more than 40 Oxygen Plants operational, and their number will increase to 99 in the coming days.

Giving details of handling the response and recovery process in J&K, the Lt Governor said that after Kerala, Jammu and Kashmir is at number two in the country in availability of medicines, hospital beds and in the Vaccination process. Today, in four of our districts, 100% eligible population of above 45 years age group has got the first dose of vaccination. Efforts are afoot to achieve 100% saturation in other districts as well, he added.

“The foundation of our model of reconstruction is public participation. And I think it can act as a framework for the whole world. I made it clear to my officers that reconstruction does not mean erecting buildings as before. Therefore, reconstruction was focused on long-term planning having public-centric policy at its core”, the Lt Governor maintained.

Giving example of decentralization, the Lt Governor said that during the challenging times of Corona, we have decentralized the community health and strengthened the panchayats from health security point of view. This is a unique model in which the Covid Care Centres are connected to the Block and Primary Health Centre, and when needed, people can directly go to the hospitals attached to the districts. Thus, their dependence on centralized institutions is being eliminated.

“It was during the war against Corona, we decided that the families who lost the sole earner in this terrible tragedy would be given pension for life and the children who lost their parents would be given special scholarship. Later, it was adopted by many other states, which is a welcome step. I believe that the policies that are made in the disaster are necessary for the subsequent reforms and for the smooth running of the governance system”, Lt Governor said.

The Lt Governor further said that keeping in mind the needs of the people, many such policy decisions have been taken, and more will follow which can spur new investments, rapidly improve digital connectivity and bring the safety net of social security to the last person in the queue which will be beginning of the real rebuilding.

The Lt Governor recalled that in Jammu and Kashmir, a small experiment was started in the direction of public participation in September last year when everyone’s participation in the work of administration was ensured and responsibility was fixed not only for implementing future plans but their time limit was also fixed with the consent of people. As a result, we have been able to handle the tragedy of Corona together, and are also walking on the path of progress.

The Lt Governor said that development, employment, skills, and equity are needed to initiate inclusive socio-economic reform. “We worked in all these areas through public participation. By identifying young boys and girls as entrepreneurs from every Panchayat, we have created a strong link of more than 20 thousand such entrepreneurs in the last 7-8 months, which will improve the lives of at least one lakh people. And its direct effect on the unemployment rate of Jammu and Kashmir can be seen,” Lt Governor added.

Referring to the report of Sustainable Development Goals of NITI Aayog, the Lt Governor said that compared to last year, this year Jammu and Kashmir has been kept in the category of “Performer”. In all the 16 benchmarks that were prepared, our ranking has improved. And this has been possible only because of public participation. We have driven public participation like a revolution in the core sectors including manufacturing, technology development, agriculture, infrastructure, human resource development, health, and public service delivery, which is showing favourable results.

The Lt Governor concluded by saying that every individual has equal and ultimate value in our social system, and on the basis of that we can build a better future.