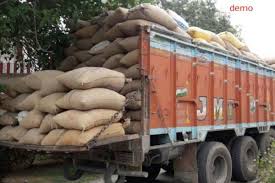 Srinagar, Jun 2: A day after Police recovered two truckloads of illicitly ferried rice from Kupwara to Srinagar, Directorate of Food Civil Supplies and Consumer Affairs Department (DFCS&CA) Kashmir has suspended two officials for their ‘prime facie involvement’ and also ordered an enquiry into the matter.

“…Pending enquiry into the matter, the two officials are hereby placed under suspension and during the course of time shall remain attached with the Direction Office”, the, a copy reads.

The Enquiry Committee has been asked to submit its report-cum-findings alongwith its recommendations within four days.

It is pertinent to mention here that police said to have seized 366 rice-bags at Pattan area in the northern Kashmir’s Baramulla district. “On receipt of specific information on May 31, an action undertaken under the supervision of Zaffar Mehdi, SDPO Pattan seized 366 bags of rice laden in two trucks bearing registration numbers JK-02V 6397 and JK-09 3233 driven by Mohammad Jamal Hajam resident of Madmadow Kalaroos Kupwara and Jahangir Ahmad Bhat resident of Bumhama Kupwara respectively at a naka established at Hanjiwera Pattan”, police said in a statement.

As per the chalan, the rice had been loaded from FCI Godown Kralhar in Baramulla and was meant to be transported to Kulangam Kupwara. However the trucks were on way to Srinagar for black marketing of (now seized) rice, it said. A case (FIR No. 152/2021) stands registered in Police Station Pattan under relevant sections of law, a police official confirmed.