There are similarities between situations of Palestine & Jammu and Kashmir, says Pakistan’s FM 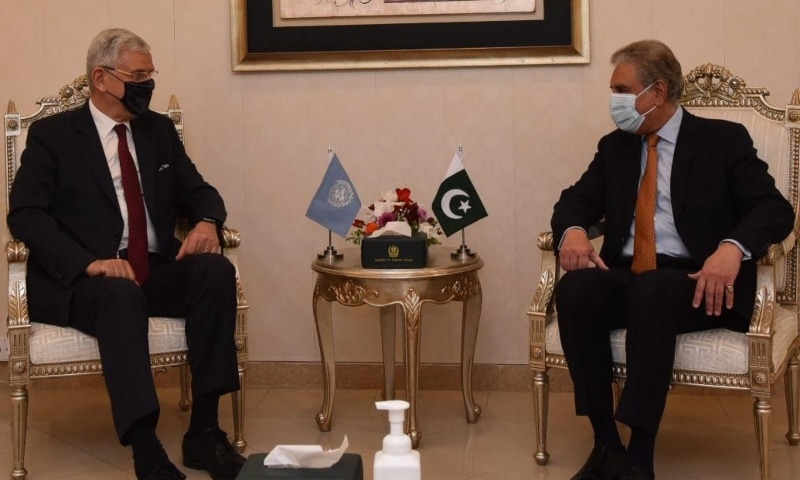 Islamabad: United Nations General Assembly (UNGA) President Volkan Bozkir said on Thursday that it was Pakistan’s duty to bring the issue of the Jammu and Kashmir dispute to the United Nations platform with more vigour, the Dawn reported.

Addressing a press conference in Islamabad along with Foreign Minister Shah Mahmood Qureshi after their meeting today, the UNGA president lamented what he said was a lack of large political will for the resolution of the Kashmir dispute compared to the Palestinian issue which had more will behind it, reports said.

“I think it is the duty, especially Pakistan’s, to bring this [issue] to the United Nation platform more strongly,” said Bozkir, adding that he agreed that the Palestinian issue and the Kashmir issue were of the same age, reports said.

According to reports he has called on all parties to refrain from changing the status of Jammu and Kashmir and said a solution was to be found through peaceful means in accordance with the UN charter and UN Security Council (UNSC) resolutions as agreed in the Simla Agreement between Pakistan and India.

Addressing the press conference, FM Qureshi said that he had briefed the president on the “dire situation” in Indian-occupied Kashmir and drawn his attention to the similarities between the Palestinian and Kashmir issues. He highlighted the common demands of the people and said both issues had been UNSC agenda items for decades, reports said.

“Pay attention. These are international obligations. The UN must play that role of responsibility which is due,” stressed the foreign minister, reports said.

“The Kashmir dispute is a reality and no one can deny it or remove it from the UNSC agenda.”

Speaking about other topics discussed in the meeting, reports quoting Qureshi said he had also briefed Bozkir on the evolving situation in Afghanistan and Pakistan’s role in its peace process. The president, for his part, said that many countries thought they were important but “some are more important.”

He according to reports said the solution to the Afghan issue would have regional and global effects therefore “I think what Pakistan is doing together with Turkey and Afghanistan is very important,” adding that it was necessary to take the opportunity and “appreciate your efforts and hope that you will come with a success story”.

Bozkir also praised Prime Minister Imran Khan and his efforts, particularly the 10 Billion Tree Tsunami initiative, giving voice to the difficulties being faced by countries by debt issues and Pakistan’s performance in dealing with Covid-19, which he said was “remarkable” and comparatively much better than other countries. He also hailed Qureshi’s leadership on the Palestinian issue as important and said he had represented Pakistan in the world “in a very good way”.

Qureshi, according to reports, in turn thanked the UNGA president for his visit and said: “We always look forward to your coming to Pakistan, you are a friend of Pakistan and in our humble way […] we will be acknowledging that and recognising your services.”