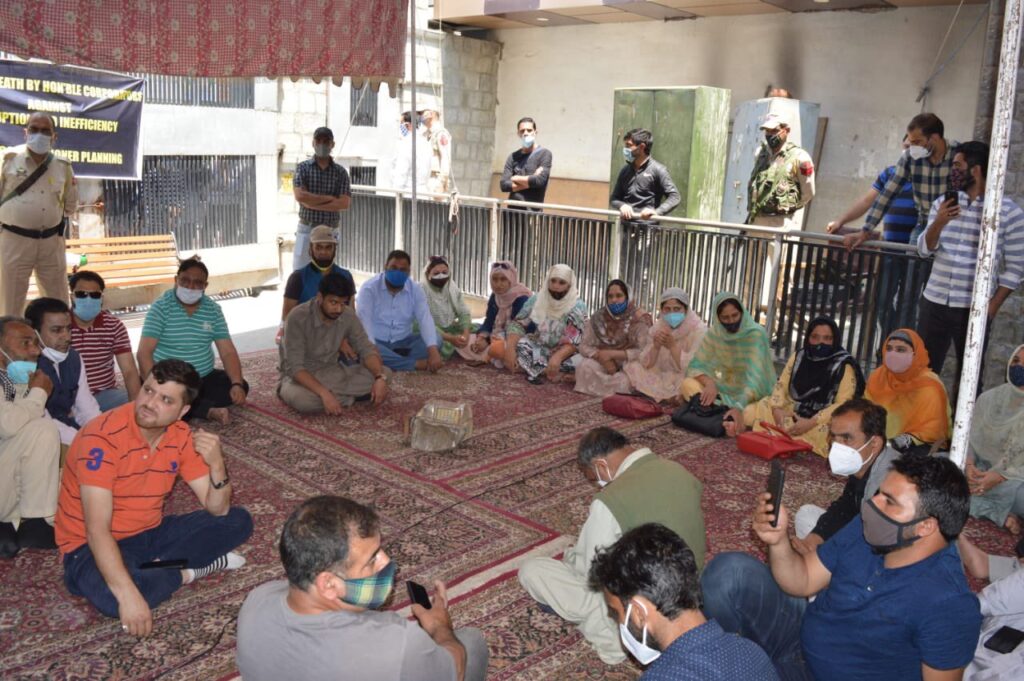 Mayor Junaid Azim Matuu and his supporters are keen to oust new JCP Ghulam Hasan Mir from SMC. The Mayor has sought removal of Joint Commissioner Planning and his repatriation to Housing and Urban Development Department (HUDD).

Pertinently, Commissioner SMC, Athar Amin Khan, last week formed a Task Force of seven officials of the SMC headed by the JCP, Ghulam Hassan Mir, to look into illegal constructions, deviations and conversion of residential buildings into commercial in Srinagar city. He has also ordered their demolition and recovery of the money lost by such constructions from delinquent SMC officials.

The Task Force led by JCP Mir during last few days demolished several illegal structures that were coming up during lockdown allegedly with the active connivance of some Municipal officials and Corporators. The drive that was started on May 21 will continue till June 6.

Continuing the protest against JCP Mir, Corporators who support Mayor staged a sit-in and raised slogans against ‘Afsar Shahi’. Mayor Juniad Matuu was part of the protest who demanded JCP Mir should be sent back to his parent department.

Joint commissioner Planning, Srinagar Municipal Corporation Ghulam Hassan Mir has already issued a statement stating that he won’t bow before the pressure tactics to issue building permissions blindly which he has not acceded to so far. “I have no favourite. I treat everyone equally. SMC is in mess because of brokers. There is huge money in building activities and illegal constructions. Illegal constructions are allowed under the garb of delayed permissions,” Mir said.

In a letter to Commissioner SMC, Mayor has enclosed a representation signed by 61 Corporators of SMC- has sought enacting of Section 46 (2) and 50 (b) of J&K Municipal Corporation Act 2000, which deal with appointment of Joint Commissioners and functions of the Commissioner respectively.

JCP, Ghulam Hasan Mir said that it is the government that has to take a final call. “I have performed my duty,” he said.

“I have no authority to comment on the subject, you please talk to Commissioner SMC,” Mir suggested.

Commissioner Srinagar Municipal Corporation, Athar Amir said that it is an administrative matter and he can’t comment on it. knt