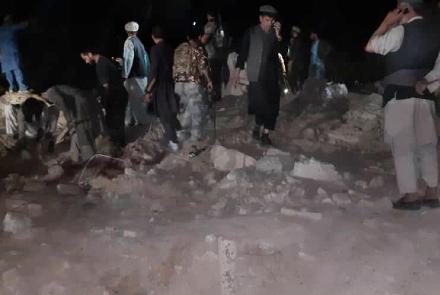 Kabul: At least 30 people were killed and over 60 more were wounded after a car bomb attack happened near a guesthouse owned in the city of Pul-e-Alam east of Kabul on Friday evening, the provincial council chief Hasib Stanekzai said, the Tolonews reported.

“He said the explosion happened at around 7:06 pm.”

Stanekzai said that the building was a residence for the former head of Logar provincial council, Abdul Wali Wakil. But now, he said, it was handed over to the people and was used by members of the public and those who came from Azr district in Logar and stayed there instead of hotels, reports said.

“He said the truck entered the area at around 6:30 pm and its driver said they were from an NGO and wanted to help the locals”.

Stanekzai said that many of those gathered at the building were students who were there to attend the university entrance exam in the coming week, reports added.

He said that the building has collapsed and that at least 25 people have been trapped only in one floor, reports added.

Stanekzai added that some security force members were also at the building when the explosion happened, reports said adding blast happened near residential houses and a hospital that all have been damaged in the incident.

Meanwhile, the Ministry of Interior said that at least 30 people were killed or wounded in the explosion. (Tolonews)