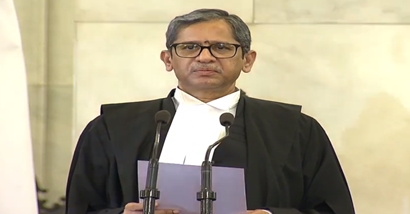 President Ram Nath Kovind administered him the oath of office at a brief ceremony held at the Rashtrapati Bhavan. He succeeds Justice Sharad Arvind Bobde who demitted office yesterday.

Justice Ramana will have a tenure of nearly 16 months as the Chief Justice and is due to retire on 26th August next year, reports said.