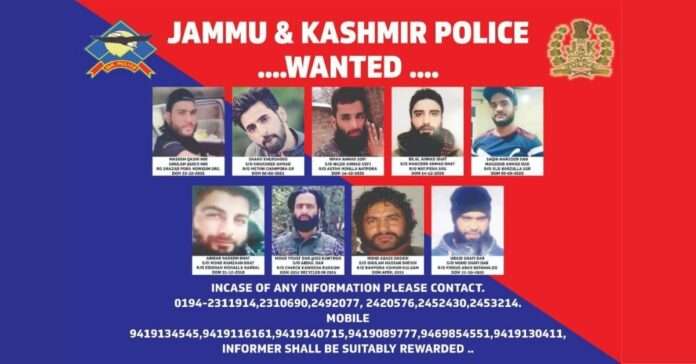 Srinagar, Mar 13: Jammu and Kashmir Police Saturday released the list of nine wanted militants operating in Srinagar and city outskirts stating that anyone who provides information about these militants will be “suitably rewarded.”

The police list also reads that among the wanted militants are Abirar Nadeem Bhat of Eidgah, Mohalla, Narbal, date of joining December 12, 2018, Muhammad Yousuf Dar alias Iss Kantroo, a recycled militant who joined militancy in 2012 and again in 2015, another one is Muhammad Abbas Sheikh of Rampora Koimoh, Kulgam and Ubaid Shafi Dar of Firdousabad, Batamaloo, Srinagar.

The police lookout notice has landline and mobile numbers for anyone who has information about the wanted eight militants. “Informer shall be suitably rewarded,” the police notice readS.