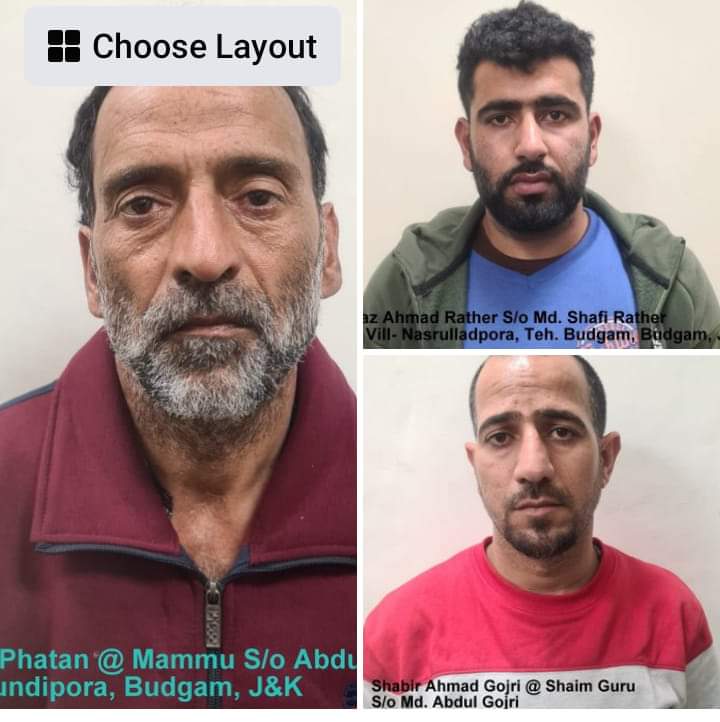 Srinagar, Dec 8: Amid rain and chill, three Budgam families staged a protest here in Kashmir capital Srinagar seeking release of their loved ones who have been arrested by Special Cell of Delhi Police yesterday.

Five men, three from Kashmir and 2 from Punjab were arrested by the Special Cell of Delhi Police from Shakarpur area of Delhi. Delhi Police said these arrests were made after a gunfight in the area.

The family members of the arrested men emerged in Press Enclave Srinagar alleging that Delhi Police like in past have enacted a drama and implicated their loved ones in a fabricated case.

Three Kashmiri men who were arrested by police hail from Central Kashmir’s Budgam district. They are Reyaz Ahmed Rather and Shabir Ahmed Gojri, both residents of Nasrullah Pora and Muhammad Ayoub Pathan of Gondhipora village.

“Can’t people of Kashmir visit Delhi? Is it a crime to visit Delhi for any work? My father runs a band saw and has nothing to do with militancy. He was in Delhi to purchase some material,” said the son of one of the arrested man Muhammad Ayoub Pathan.

Pathan is the father of three daughters and 2 sons.

Shaista- wife of Shabir Ahmed Gojri said that her husband visits the shrine of Ajmeer Sharif every year and this time another youth from the same village Reyaz Ahmed accompanied him. “My husband had to pay obeisance at Ajmeer Sharif while Reyaz being a Welding expert had to get some stuff from Delhi,” she said.

The family members of all these men while seeking the intervention of Lieutenant Governor Manoj Sinha and Director General of Police Dilbagh Singh appealed Delhi Police to release them.

“We have seen in past how Kashmiri men were implicated in false case and after spending years together in Jails were acquitted by the court of law,” they said. (KNT)