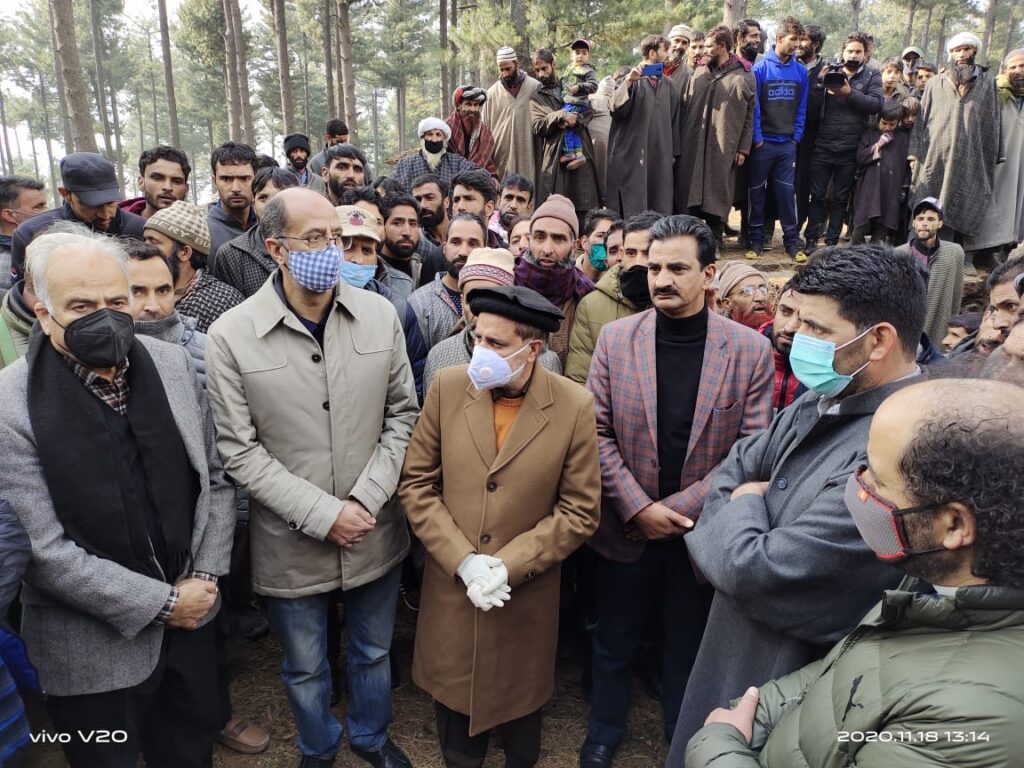 Srinagar, Nov 18: The Jammu and Kashmir National Conference on Wednesday said the recent demolition of hutments of Gujjar and Bakarwal community in Lidroo Pahalgam gives an insight into the discrimination and apathy that the BJP nurtures against them debunking their claims on being guardian of tribal rights.

Ever since BJP came into power at center and state, there has unfortunately no cessation to the hostility against the Gujjar and Bakarwal community, which forms the third biggest ethic block in the region, the delegation of Party members visiting Lidroo, Pahalgam said while interacting with the families whose hutments were illegally raised to down by the government. The visiting delegation was led by Senior Party Leader Mian Altaf Ahmed; Party’s Provincial President Nasir Aslam Wani, MP Anantnag Hasnain Masoodi, District President Anantnag Altaf Kaloo, District President Kulgam Abdul Majeed Bhat Larmi, and Riyaz Khan were also part of delegation.

The delegation expressed sympathies with the affected, expressed solidarity with them and demanded strict action against the officials who carried out the unlawful demolition of the Gujjar hutments at a time when winter has set in and the temperatures have fallen to sub zero level. The visiting delegation unequivocally condemned the highhandedness of the officials saying that targeting Gujjars, it seems, is part of the larger design of BJP to disenfranchise every segment of society in J&K, and that intimidating Gujjars, bulldozing their poor dwellings, attacking their cattle should be seen in that direction.

The delegation members while ruing the highhandedness of officials said that the government was now putting the blame on the forest department in a bid to escape the wrath of people. However passing the blame won’t help the government to absolve itself from the illegal eviction of the poor tribals and subsequent razing down of their hutments.

The incumbent government at center had made much clamor on ensuring tribal communities of J&k all the rights enjoyed by their counterparts in other parts of the country, but far from delivering on the promise the government has mounted a tirade on the poor community, the leaders said. “All the claims made by the incumbent ruling dispensation at Delhi in the run up for unilateral and unconstitutional abrogation of the state’s status have fallen flat,” they added.