Says 250 to 300 militants at launch pads across LoC 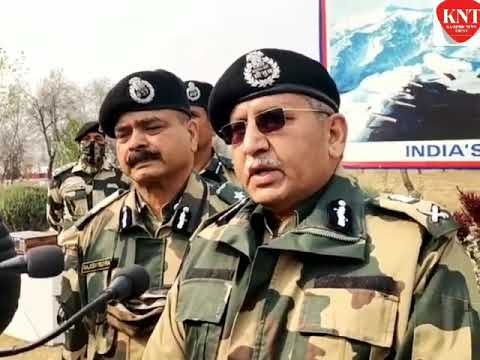 Srinagar, Nov 09: Additional Director General of BSF Surinder Pawar Monday said that the operation in Machil area of north Kashmir’s Kupwara district is still underway and that this year only 25 to 30 militants managed to infiltrate into this side compared to 140 last year.

Speaking to media men at BSF Headquarters at Humhama on Srinagar outskirts on the wreath laying ceremony of slain BSF constable, the ADG BSF said that at 1 am (on Saturday), BSF men noticed suspicious movement of three militants at Machil sector after which a team of BSF led by two constables—Constable Sudir Kumar and Constable Abdul challenged the militants. “One of the militants fired at Constable Sudir injuring him badly. The exchange of fire continued till 4:30 am. The injured BSF constable succumbed to his injuries,” Pawar said.

Pawar said that with the first light on Sunday, army reinforcements launched an operation in which two militants were killed. “In the exchange of firing, army captain Ashutosh Kumar and two soldiers were killed,” the ADG BSF said. He said the BSF had already an input about possible infiltration bid.

“Our ambush-cum patrolling party noticed the movement of militants on the intervening nigh to November 7 and 8,” he said.

Asked the status of infiltration this year, he said this year only 25 to 30 militants managed to enter into this side compared to 135 to 140 last year. “Our counter infiltration grid is very strong. Machil was obviously a big infiltration bid that was foiled by alert troops,” he said.

He said the operation at Machil is still on. “The area comprises tough terrain and uneven ground. To rule out the presence of any other militant, sanitization and mopping operation is on in the area,” he said.

“In view of the snowfall prediction in mid-November, there may be more attempts. But our troops are alert to foil all bids,” the BSF officer said. He said that there are 250 to 300 are still present at the launch pads across LoC, who may try to infiltrate before the snowfall—(KNO)