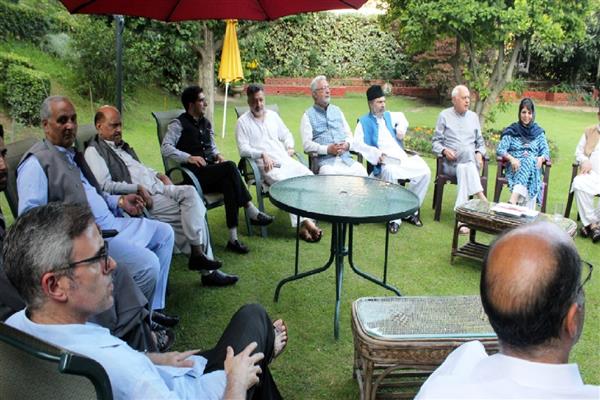 Srinagar, Oct 23: The ‘Peoples Alliance for Gupkar Declaration’, an amalgam of mainstream leaders striving for restoration of the Article 370 and statehood, is all set to hold its next meeting on Saturday here.

Sources said that all the members of the group have been invited for the meeting, which is scheduled to start at 2:30 am at Mehbooba’s Gupkar residence.

The members of the alliance have resolved to fight for the restoration of Article 370 as well as for the resolution of Kashmir issue.

Sources said the conglomerate is likely to announce its chairman, vice -chairman, general secretary and others.

“Farooq Abdullah is likely to be announced as head of the group while PDP President Mehbooba Mufti and People’s Conference chairman Sajad Gani would be given important positions,” they said.

Senior leader and former MLA Kulgam, M Y Tarigami said that he has no knowledge about the structure taking place in the group. However, he said the meeting is being held and will discuss the future course of action.

Earlier on October 15, the major mainstream political parties of Jammu and Kashmir forged an alliance to fight for the restoration of erstwhile State’s special position (Article 370) and Statehood.

The alliance was formalised after two hours meeting of the signatories of Gupkar declaration at the residence of National Conference president Farooq Abdullah here.