Our fight not confined for Artricle 370 restoration only, but for resolution of K-issue: Mehbooba Mufti 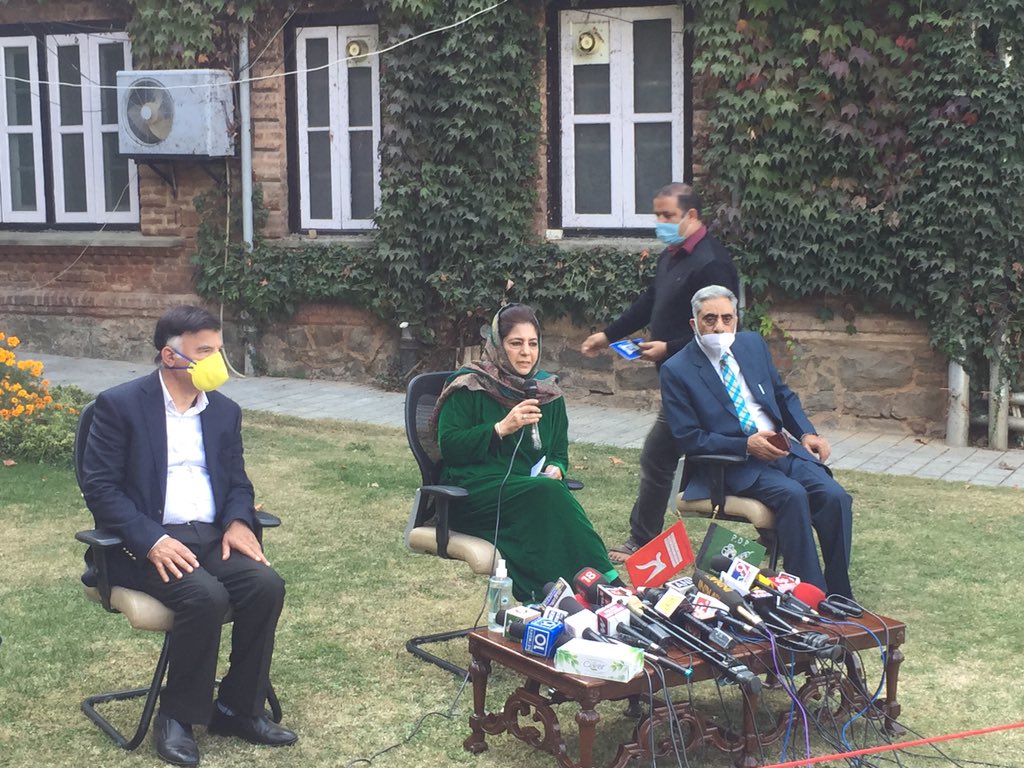 Srinagar, Oct 23: Former chief minister and Peoples Democratic Party (PDP) president, Mehbooba Mufti on Friday said that she will not raise any flag till the flag of erstwhile state of Jammu and Kashmir is returned.

She also alleged that the ruling party in the centre is trying to replace the constitution of the country with its party manifesto.

Addressing a news conference, Mehbooba Mufti, who was accompanied by Abdul Rehman Veeri, Ghulam Nabi Lone Hanjura and Suhail Bukhari told media persons that the Bharatiya Janata Party (BJP) has demolished the constitution of the country.

She said the BJP has demolished the country’s constitution and has been implementing anti-people acts.

However, she said that the current era of authoritarian rule will also not sustain forever, saying that Hitler’s rule also culminated.

“Anyone who is raising his or her voice over the abrogation of Article 370 is being suppressed. The fact is that the government has failed to come up with the expectations of people over development, employment and other mandatory issues and to divert the attention, the government is blocking minorities and also Kashmiris,” she said in her first press conference, 11 days after she was released from 14-month-long detention.

“Our fight is not confined for the restoration of Article 370, but for the resolution of Kashmir issue as well. Kashmir issue is an issue and nobody can turn their eye blind towards it,” she said.

Mehbooba added that “those who think we will forget Article 370 are living in fools paradise. People have given a lot of sacrifices and we won’t allow the sacrifices to go waste.”

She added that she will be the first person among the leaders to give her blood for this cause in case the need arises.

“We (leaders) are united and people should also fight it in unison. It is not the fight of Dr Farooq, Sajad Lone or any other leader. But of one and all,” she added.

“Since Article 370 was abrogated, the government left no stone unturned to hurt the sentiments of people by taking all the anti-people decisions. They don’t want people of Jammu and Kashmir. People of JK are expendable for them,” she added.

Asked about her statement regarding the flag before the abrogation of Article 370, the former chief minister said that they are not going to raise any other flag till the flag of Jammu and Kashmir is returned.

“The ruling party has already demolished the constitution as well as the flag as the party used the flag (tricolor) in a pro-rapists rally in Jammu. The flag of Jammu and Kashmir was the only reason behind the relation with the other flag,” she said.

She while replying to a query said, whether Jammu and Kashmir is a Union Territory or a State, Mehbooba Mufti is not here for power.

“We didn’t ally with BJP for power. If you remember my father made a statement on 28 July 2014 wherein he stated that he wants to work for JK people. By forging an alliance with the BJP, my father tried to put jinn into the bottle. He knew a Tsunami is coming,” she added.

She also stated that it was not the alliance with BJP that led to the abrogation of Article 370 as everything was done from the parliament.

“It was the parliament that was misused. Parliament had no right to do this. We stood like a wall for Article 370. It was only because of releasing stone pelters, Jamaatis and returning the bodies of militants to their families that the bonhomie with BJP,” she said.

Asked whether she has any regret of forging an alliance, Mehbooba said she regrets for posing a faith on the leader from that party who have demolished the constitution of the country, who stole everything from J&K.

She also added that she has been a street fighter and coming on roads is nothing new for her.

About elections, she said that “Mehbooba has nothing to do with the elections.

” However, she said that party leaders and the signatories of Peoples Alliance will sit and take any decision accordingly.

“It was not a delegation of BJP leaders. If Geelani was not willing to talk, he should have at least allowed them to enter the house. But restricting their entry in the home has portrayed different picture of Kashmir,” she said.