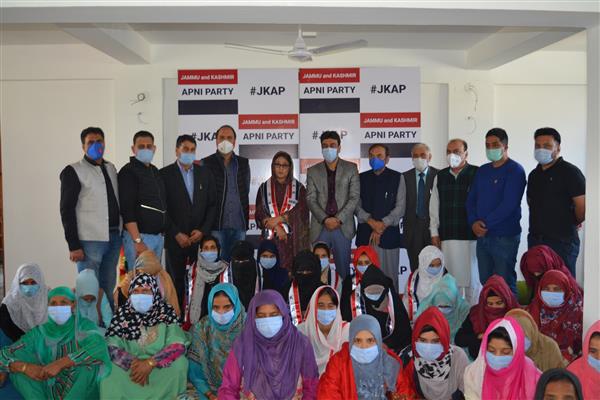 SRINAGAR, October 7: Noted socio-political activist Tanveer Fatima along with dozens of her women workers from Sopore constituency on Wednesday joined the Apni Party.

According to statement, the party leaders welcomed the new entrants and hoped that their joining will increase the support for the party at the grassroots level in north Kashmir.

Addressing the new entrants, Mohammad Ashraf Mir, provincial president Kashmir said that women have an important role in the society so their representation in electoral politics is a must.

“Unfortunately, the women in Kashmir have been the worst sufferers of the violence during the last three decades in which they witnessed a tumultuous situation,” Mir remarked, adding that women in J&K especially in Kashmir valley can now play an important role in creating a congenial atmosphere for peace and prosperity.

On this event, Tanveer Fatima pledged to work relentlessly to promote the Apni Party’s agenda among the people in Sopore and its adjoining areas so as to enable the people to make a distinction between different political parties operating in J&K. She said that people should give a chance to the Apni Party and feel the difference.