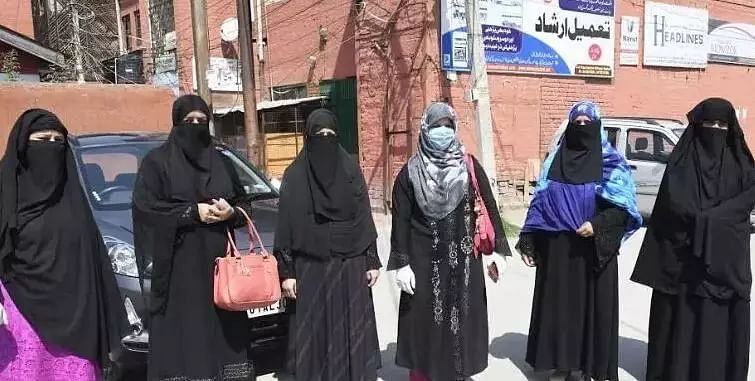 Srinagar, Sep 28: Police detained some Pakistani ladies married to former militants at Gupkar after they tried to meet LG on Monday morning.

Some 11 Pakistani ladies had gone to LG House to meet Lieutenant Governor Manoj Sinha, however, as they de-boarded from the three wheelers, they were detained by police and shifted to Ram Munshi Bagh Police Station.

Pakistani ladies in past have registered various protests saying they are living as ‘stateless citizens.’ They demand grant of either citizenship rights or deportation.

One of the ladies who were part of the group said that they had gone to LG house on September 1st where they were told to come after two or three weeks.

“Today we wanted to meet LG, but were detained by police. We wanted to request LG to deport us or address our grievances,” she said adding they have been away from their families since the day they stepped foot in Kashmir Valley along with their Kashmiri husbands and kids.

“We arrived in Kashmir in 2011 under ‘Rehabilitation Policy’ but since then we are not being allowed to meet our families back in different parts of Pakistan,” the lady said.

Pertinently, the then Chief Minister of Jammu and Kashmir, Omar Abdullah in November 2010 had announced to rehabilitate former militants and a large number of former militants who had married in Pakistan arrived in Kashmir via Nepal.

“It has been almost 10 years since I saw my parents. We have been caged here and we don’t know why. What is our fault or that of our parents?” a couple of ladies said.

“Allow us to re-unite with our families,” they said.

A Police official declined to comment on the issue; however, sources said that these ladies were detained as they had not sought any permission before trying to meet the Lieutenant Governor. “They were detained and later released,” sources added. (KNT)