In his meeting with a delegation of Kashmiri journalists, Lt Governor sought their cooperation in building peaceful J&K 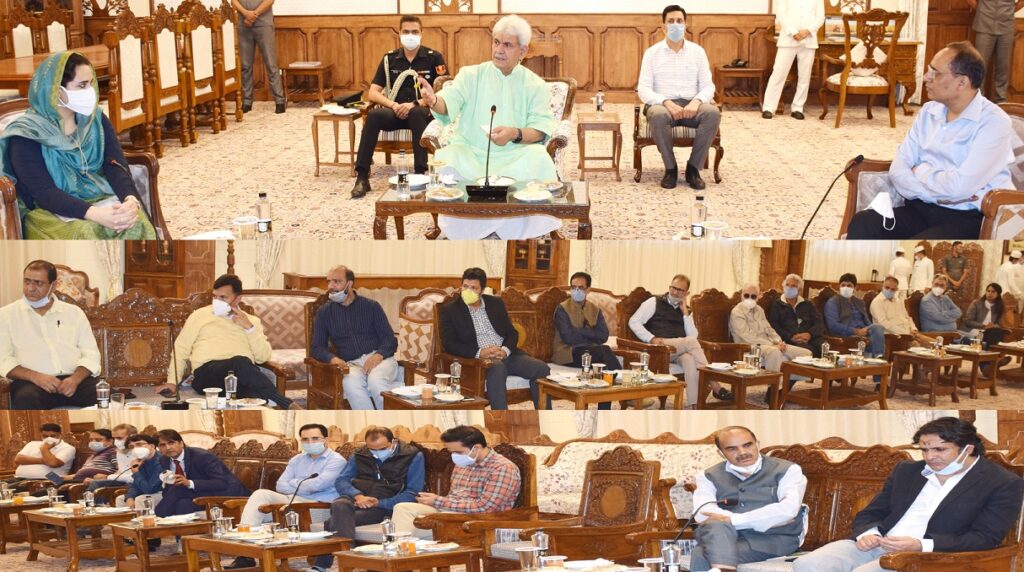 Srinagar September 04: A delegation of journalists called on Lt Governor Manoj Sinha on Friday and shared with him their perceptions about the ground situation in Jammu and Kashmir.

The Lt. Governor assured them of government’s full support and sought their cooperation in building peaceful and prosperous Jammu and Kashmir.

He told media persons that this is the first round of interaction and more such will follow as this process of having interactions with media fraternity will be a continuous one.

In a first, 30 top journalists belonging to print and broadcast media outlets from the Kashmir valley met Lt. Governor.

“Detailed discussions were held in a free atmosphere over issues like the functioning of media houses, health sector and the issues faced by the common people of valley. Manoj Sinha is the first Governor of J&K who held a meeting with such a large group of journalists in the valley at such a long stretch. The credit goes to Principal Secretary Rohit Kansal and Director Information and Public Relations ,Dr.Sehrish Ashgar,” said one of the participants.

Thorough discussions were held over the new media policy, functioning of newspaper organizations and allotting of government advertisements to the local media outlets.

“We also held discussions regarding the advertisement policy of government, distribution and new media policy. Our group also asked LG that the government should ensure free and fair press and there shouldn’t be any curbs on the functioning of media persons in the valley,” said another journalist who was present at the meet,
The visiting journalists also apprised the LG about non-cooperation of police despite the fact that 16 journalists have already been killed on field in the line of duty, this place being a conflict zone since the last three decades.

The successive governments have promised the installation of a main gate on the entrance of the Press enclave which was never taken up.

On the pretext of COVID-19, the common people are suffering in numerous ways but there is a complete breakdown of administration in hospitals and in other sectors. There should be accountability in the administration and the issues highlighted through the press need to be redressed on priority to bring some respite to the common masses, whichever government is in place. There is a huge gap between the administration and the government which causes the suffering to locals, the journalists informed LG.