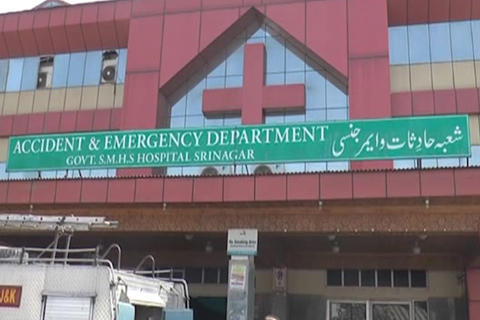 Srinagar, July 17: The doctors and other paramedical staff have begun strike on Friday at Srinagar’s SMHS hospital after some miscreants assaulted a female doctors and vandalised the hospital property.

Earlier in the day, attendants as per the official sources questioned the doctors for remaining absent from their duties.

Officials said that the incident later sparked protest by doctors, who later began a strike and demanded security for themselves in the hospital.

Principal Government Medical College, Dr. Samia Rasheed said that a female doctor who was busy with an emergency case at the hospital during which some of the attendants attacked her and pelted stones on the doctors and vandalized the property.

“After the act, the doctors went on strike and have been demanding security for them. I am with them in their demands and the doctors have decided to resume their work only after proper security is provided to them,” she said.

Meanwhile, Divisional Commissioner, Kashmir, P K Pole said that an FIR has already been registered in this regard.

He said that miscreants involved in the act have been identified, adding that at least three persons have also been detained.

He said that strict action will be taken against the miscreants for assaulting the doctor and vandalizing the hospital property.

Asked about the demands of doctors who are on strike, Pole said that the local police station is already close to the hospital and they have been taking care of the incidents taking place at the hospital—(KNO)