‘LAC has been effectively shifted by a kilometre into India in Galwan Valley’: Report

New Delhi, July 09: Details of the mutual troop disengagement in the contested Galwan River valley, which senior government sources have shared with Business Standard, illustrate that the Line of Actual Control (LAC) – the de facto border – has been effectively shifted by a kilometre (km) into India, Business Standard reported

The terms of disengagement, negotiated on June 30 between senior military commanders from both sides, regard the LAC as running through the so-called Y-Nallah Junction. This is one km inside India, when compared with the LAC’s historical alignment next to Patrolling Point 14 (PP-14), it added.

The area in which PP-14 is located – and which the Indian Army has patrolled for decades – now effectively falls inside China’s “buffer zone”.

The Business Standard reported that the disengagement plan, drawn up by India’s Leh corps commander, Lieutenant General Harinder Singh, and China’s South Xinjiang Military Region commander, Major General Liu Lin, provides for a “buffer zone” of three km on both the Indian and Chinese sides of the LAC.

A “tent post”, as its name suggests, is an encampment that has only temporary structures. Permanent structures would allow India to stake a claim over the Galwan valley.

By restricting the Indian presence to “tent camps”, China can continue with its new claim over the entire Galwan River valley – which it has voiced several times in the past two months.

Business Standard said army sources pointed out that, by measuring all distances from the Y-Junction, rather than from the traditional LAC alignment west of PP-14, the Y-Junction has been effectively regarded as the LAC point.

It is learnt that this was done on the insistence of Chinese military negotiators. New Delhi continues to insist that the LAC runs along the line of PP-14, but has undermined its own claim by agreeing to locate its forward “tent post” 2.4 km from what it claims is the LAC, while allowing the Chinese forward “tent post” to be just 400 metres from our claimed LAC, the report added. 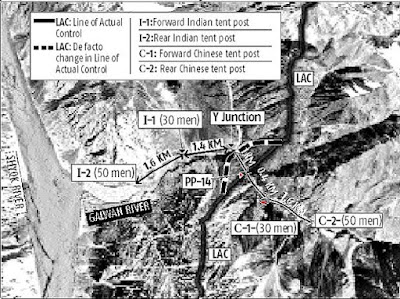 Map showing how LAC has been shifted by a kilometre (km) into India in Galwan Valley. Map/Graphics; Business Standard

For now, neither country is permitted to send patrols ahead of their forward “tent post”. That means the Indian army, which earlier sent patrols all the way up the Galwan River valley to PP-14, will have to maintain a distance of 2.4 km from PP-14. In contrast, Chinese patrols can come up to 400 metres from PP-14.

Meanwhile, no agreement has been reached for the Chinese to disengage or pull back from confrontation points south of Galwan at PP-15 and Hot Spring area, where large numbers of Indian and Chinese soldiers continue their face-off, the business standard report said.

Near PP-15, where the Chinese have built a road extending 3 km into Indian-claimed territory, more than 1,000 Chinese troops are eyeball-to-eyeball with an equal number of Indian soldiers.

In the Hot Spring area, the Chinese have not built a road, but over 1,500 Chinese troops have intruded 2-3 km into Indian territory at the Gogra Heights (PP-17A) and are being blocked by a matching Indian deployment, the report said.

Nor is there any agreement on disengagement in the Pangong Tso sector.

Indian troops have traditionally patrolled up to Finger 8, but are now being blocked by the Chinese intruders at Finger 4. It is understood the Chinese are refusing to withdraw to Finger 8 unless India withdraws to Finger 2.

Indian Army planners find themselves contemplating the possibility of more Chinese intrusions along the contested 3,488-km border, the report said, adding, that could lead to the army having to man a “hardened LAC” around the year, like the Line of Control (LoC) with Pakistan.

Besides the heavy cost of setting up this border infrastructure, the Indian army – which already spends three quarters of its budget on salaries and pensions – could find itself requiring even more manpower.

Army planners also worry that a heated LAC, with an additional commitment of troops and equipment, would erode India’s conventional first-strike deterrent against Pakistan, the report said.