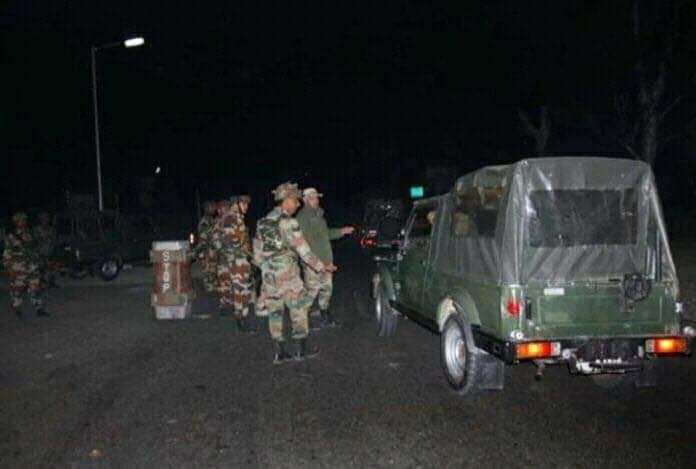 Srinagar, April 29: A army major was injured after a fresh firing resumed at Melhoora area of Shopian district in south Kashmir on Wednesday.

Official sources said that when forces were searching for third militant body at encounter site, the militant hiding under debris fired upon forces.

In this incident a army Major was injured, identified as Major Capray of 55RR. He was subsequently shifted to army hospital.

Its pertinently to mention that operation had started yesterday and was prolonged due to the darkness.

Yesterday two civilians were also injured near the encounter site and one of them, a woman, was hit with a bullet in her leg.

Also a soldier suffered bullet wounds in the operation. Two militants were also been killed during the initial exchange of fire.

Two civilians sustained injures near the site. Among them, a woman Shahnaza Bano wife of Farooq Ahmad Koka suffered bullet and was shifted to a nearby hospital wherefrom she was referred to SMHS hospital Srinagar.

Another civilian Asif Ahmad Reshi son of Nissar Reshi of Watchi according to reports suffered pellet wounds after police and paramilitary forces chased a group of youth near the encounter site. All the injured have been moved to different hospitals.

“So far two militants were killed in the operation. The identities and group affiliation of the slain are being ascertained,” he said.

The officer said that the operation may stretch throughout the night even as lights have been already erected and exit points sealed with additional reinforcements.

There have been a series of gunfights in south Kashmir in the past four days, in which nine militants and two militant associates were killed, as per police reports.

(With inputs from GNS)