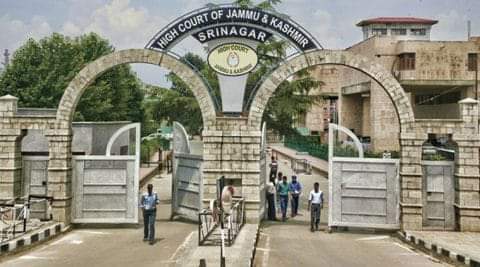 Srinagar: The Jammu & Kashmir High Court on Friday directed the government to file its response on the petition filed by the renowned journalist and author, Gowhar Geelani seeking quashing of FIR lodged against him under the Unlawful Activities (Prevention) Act -1967

A bench of High Court headed by Justice Ali Muhammad Magrey directed the government to file its response on the petition before the next date of hearing scheduled on May 20.

The registration of FIRs against Gowhar, freelance photojournalist Masrat Zahra and summoning of The Hindu’s special correspondent Peerzada Ashiq by police has evoked widespread criticism from different quarters. The international bodies of Journalists like Reporters San Frontiers (RSF), Committee for Protection of Journalists(CPJ) and International Federation of Journalists(IFJ) have demanded withdrawal of charges against them

Appearing on behalf of the petitioner, counsel Salih Pirzada submitted that Cyber police station has no jurisdiction to register and investigate offences under the UA(P)A-1967.

“Learned counsel appearing for the petitioner submits that the ground of jurisdiction of the Cyber Police Station to register and investigate the case outside the scope of Information Technology Act, 2000 has already been the subject matter of the decision by Kerala High Court in case titled Rajesh Vs State of Kerala and the said Court while quashing the FIR has held that the Cyber Police Station has no power to investigate the offence beyond the one arising out of the provisions of Information Technology Act, 2000,” reveals the order.

He also submitted that the FIR does not disclose the commission of offence under Sections 505 of IPC and Section 13 of Unlawful Activities (Preventions) Act, 1967.

“The information forming basis for registration of FIR for commission of offence under the provisions of Unlawful Activities (Prevention) Act, 1967, does not meet the  requirement of the definitions made in Section 3 of the Act of 1967,” the counsel contended.

Appearing on behalf of the government, additional advocate general BA Dar submitted that after registration of FIR, the government has transferred the case to Police Station Sadder for investigation.

“Learned counsel submits that on registration of the case, the Cyber Police Station, Kashmir Zone, has forwarded the matter to the Supervisory authority of Police and the Inspector General of Police, Kashmir, transferred the case to Police Station, Sadder, for investigation in terms of order dated 22.04.2020, therefore, the jurisdiction aspect of the matter is not available to the petitioner to seek quashment of FIR, which otherwise also, cannot be a ground for quashment of FIR,” the order reveals.

The AAG also submitted he could not meet all the grounds raised by the petitioner due to non-availability of the petition. Gowhar is a renowned journalist and author contributing to Deutsche Welle (Germany), The Federal, British Broadcasting Corporation (BBC) and other media outlets—(KNO)