Civil secretariat to remain functional in both capitals, to re-open in Srinagar on May 4

Kashmir based staff to work from Srinagar; Jammu-based staff from Jammu 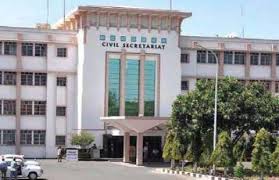 Srinagar, April 10: In an unprecedented move, the administration of Jammu & Kashmir on Friday reshaped the 148-year-old bi-annual practice of Dubar Move due to outbreak of deadly coronavirus.

Making a significant departure from the past practice, the government today ordered that civil secretariat will function from both capital cities of J&K at least till June 15 when it will review the arrangement after assessing the extent and spread of COVID-19.

According to the order, all offices in J&K highest’s seat of power, civil secretariat, and other 100 offices will remain functional in both the capital cities during this period. The move employees shall work on” as is where is” basis i.e. Kashmir -based staff shall work from Srinagar and Jammu- based staff from Jammu.

The government has directed administrative secretaries and departments with single Head of Department (HOD) to ensure their functionality in their respective departments, both at Srinagar and Jammu. Interestingly, the government has also directed Srinagar Municipal Corporation (SMC) to carry out extensive fumigation and sanitation in civil secretariat, other moves offices, residential colonies and hotels being provided to employees.

Curiously, the government order is silent on the practice of shifting records from civil secretariat Jammu to Srinagar in the last week of April every year.

In 1987, Farooq Abdullah-led government floated the idea of stalling the practice and constituted a committee to look into the matter. In its report titled “Durbar Move: The Reality”, the committee pointed out that the exercise wastes nearly six to eight weeks of precious official time in packaging, moving and then settling down to work. In 2012, Chief Minister Omar Abdullah questioned the wisdom of Durbar Move, saying: “It is wastage of money and an escapist move.”— (KNO)