Karachi/Peshawar: At least 10 persons, including four children and a woman, were killed in separate incidents after incessant rain lashed parts of Pakistan, authorities said.

In Sindh province, at least three persons were killed due to electrocution in different parts of Pakistan’s biggest city, Karachi, which also witnessed severe power outages, police said on Monday.

In Pakistan’s northwest Khyber-Pakhtunkhwa province, five persons, including two children and a woman were killed on Sunday.

Two were killed in Shangrila and one each in Buner, Mansehra and Abbottabad, according to the Provincial Disaster Management Authority. 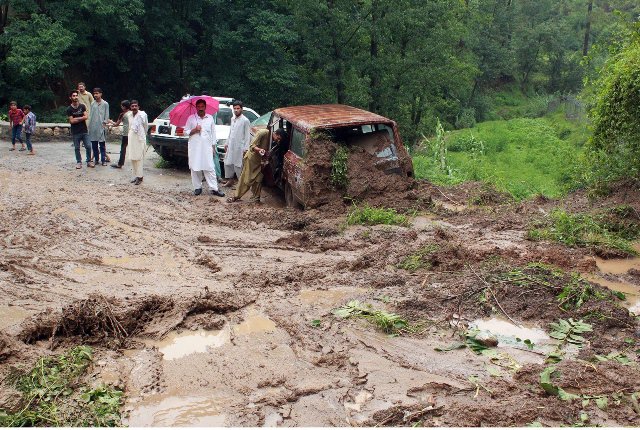 Heavy rainfall in the province also damaged five houses, two huts and three school buildings. Different areas of Chitral, including Tirich Mir and Kosht were closed off for traffic due to flooding, the Express Tribune reported.

In Punjab province’s Sargodha city, two children were killed due to a roof collapse. Five more roof collapse incidents were reported in Sheikhupura and officials placed the number of injured at 10, the report added.

Rains and snowfall often cause landslides and flash floods in northern Pakistan where millions live in mountainous areas.

Incessant rainfall across Pakistan has led to power outages in many major cities.

In Karachi, scheduled court hearings in various courts such as the Supreme Court Karachi registry, the Sindh High Court and accountability courts were affected due to power outages.

The Pakistan Meteorological Department in an advisory has forecast more widespread rains and wind-thunderstorms in the next 24 hours in Karachi, Mirpurkhas, Thatta, Hyderabad, Shaheed Benazirabad, Kalat and Makran divisions.

Due to heavy rains, lot of water got accumulated on the roads where as several areas got flooded as the drainage system failed. Heavy traffic jams were also seen on roads.

Schools and colleges also remained closed in Karachi due to heavy rains since early morning.