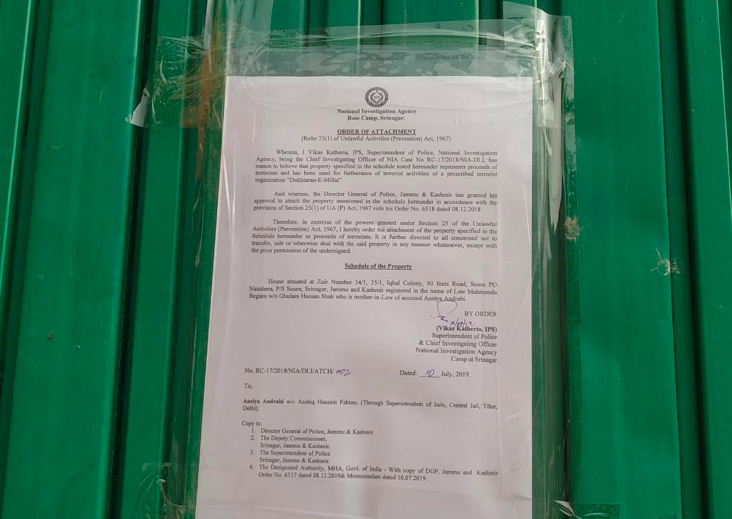 Andrabi and two of her close confidantes Nahida Nasreen and Sofi Fahmeeda were arrested in Soura area of Srinagar in July 2018 in connection with funding and other cases registered against them and shifted to Delhi.

NIA sleuths assisted by police and forces pasted attachment order at the main entrance of the house of Andrabi located at 90 ft in Soura in the city outskirts. The NIA action came after getting property approval by Director General of Police (DGP) Dibagh Singh.

The NIA in the notice has directed all the concerned not to transfer, sale or otherwise deal with the said property in any manner, whatsoever, except with prior permission.

The notice said, ‘NIA has a reason to believe that the property represents proceeds of terrorism,’, adding that the house was used by DeM for ‘furtherance of terrorist activities’.

She was arrested in a new case registered by the NIA in April last year for secessionist activity and waging a war against India. She was also named in terror funding case.

The NIA had said Aasiya Andrabi runs Dukhtaran-E-Millat (DeM) with the help of her associates Sofi Fehmeeda and Nahida Nasreen. The DeM is proscribed under the First Schedule of the Unlawful Activities (Prevention) Act, 1967.

The NIA claims that Asiya Andrabi has been using various media platforms to spread insurrectionary imputations and hateful speeches that endanger the integrity, security and sovereignty of India. The DeM advocates secession of Jammu and Kashmir from India.