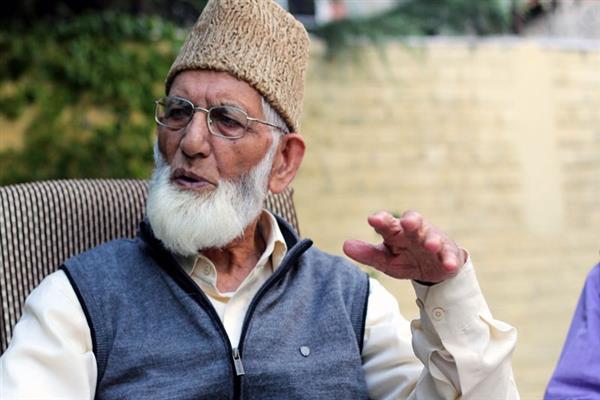 Srinagar: Hurriyat Conference (G) chairman, Syed Ali Geelani has said that the plight of political prisoners in and outside Jammu and Kashmiris is disturbing and painful not only for their families, but for the “whole nation”.

In a statement he appealed for peaceful protests after Friday prayers in all parts of the valley including Chenab valley and Azad Kashmir to show the solidarity with these detainees.

Hurriyat (G) chairman said that one fails to understand, how world community affords to give a free hand to India, to snatch every right from the people, who have been made hostage to its egoistic and imperialistic oppression. “The so-called Indian democracy is so scared of pro-freedom leaders and activists and leaves no stone unturned to keep them behind bars on fictitious and false charges, propagated through their biased and hypertonic media houses,” he added.

He said that  khateebs and religious scholars should apprise the people about the prevailing situation here and guide them to achieve their collective goal.