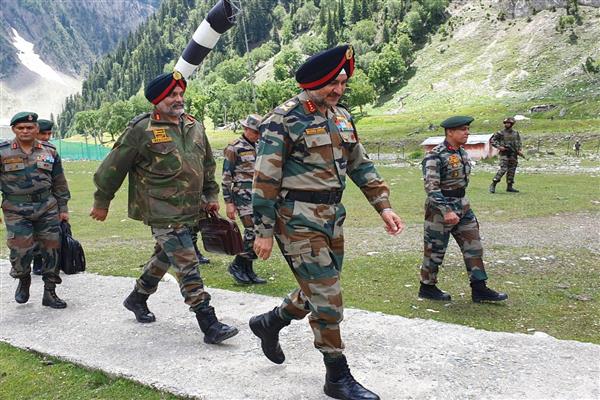 He visited the Army formations and units deployed for the Amarnath Yatra accompanied by the Chinar Corps Commander, Lt Gen KJS Dhillon. The security and administrative arrangements were reviewed during the visit.

He was briefed by the commanders on ground about the deployment and measures taken for close coordination with the Civil Administration and other security forces to ensure a safe, secure and efficient conduct of the Yatra.

The Army Commander appreciated the synergy being maintained amongst all security agencies and the State Government. He further reiterated that all assistance will be provided to the newly inducted CAPF units and complimented the efforts of troops for coordinating all the requisite arrangements.

The Army Commander also lauded the integrated approach and cooperative spirit amongst all the agencies to thwart any possible nefarious designs of anti-national elements.

Earlier, on 15 Jun the Army Commander had chaired a key Security Review Meeting which was attended by the senior officials from the Army, Police, CRPF and other security agencies.

During the meeting, detailed aspects of coordination related to the smooth conduct of Amarnath Yatra were discussed. He had also appreciated the co-operation being maintained through the joint efforts by all the agencies.