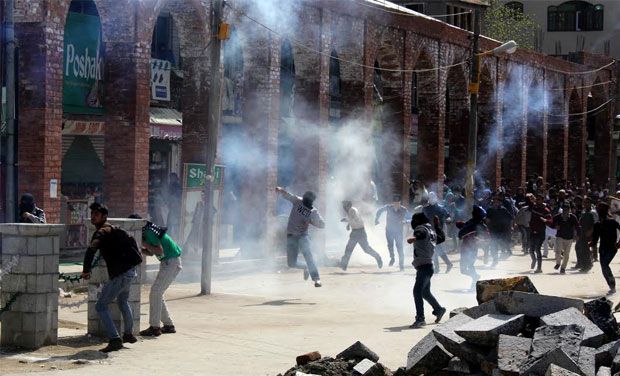 Srinagar: Normal life in central Kashmir was severely affected on Thursday in wake of the strike called by the Joint Resistance Leadership (JRL) against the Parliamentary elections even as around 20 youth and government force personnel were injured in clashes at several places.

Srinagar, Budgam and Ganderbal constitute Srinagar Parliamentary seat and there was voting in these central Kashmir districts in second phase of the polls conducted today.

Shops and business establishments remained closed in these districts while traffic was off the roads. Schools and colleges along with government offices in the district also remained closed due to the holiday announced by the government in the poll-bound areas.

The call for the strike was given by the Joint Resistance Leadership (JRL) comprising Syed Ali Geelani, Mirwaiz Umer Farooq and Yasin Malik.

Meanwhile, at least 25 youths and government forces personnel were injured in clashes in several parts of central Kashmir.

Similar reports of clashes were reported from Machowa, Kralpora, Hafroo, Chadoora in Budgam, Srinagar’s Safakadal, Nowabazar, Gojwara, Hawal, Batmaloo and some parts of Ganderbal including Mammar Kangan and Barsoo. The forces deployed in these areas used tear smoke shells, pellets and few aerial shots to disperse the protesting youth during which eighteen persons including a woman were injured.

Among the injured, one youth namely Mohd Asif Bhat sustained a bulletin wound in his thigh at Hafroo Chadoora and was immediately taken to nearby hospital where from he was referred to Bone and Joint Hospital Srinagar for specialised treatment.

Meanwhile, the internet services were suspended in poll-bound districts of Valley since last night while as the speed was throttled elsewhere in Kashmir. (GNS)