RSS calls for handing over Kishtwar to Army, extending of ‘operation all out’

Jammu: Condemning the killing of its leader and his PSO in Kishtwar, the RSS Tuesday termed the attack a “security lapse” and called for extending the Army’s ‘Operation Allout’ in the hilly district to prevent spread of militancy in the Jammu region.

The Rashtriya Swayamsevak Sangh said it will not be cowed down by attacks and killings of its leaders to engineer a 1990-like situation of fear among Hindus, but sacrifices of its cadre will further strengthen our resolve against militancy.

An RSS leader and his security guard were killed on Tuesday when a militant opened fire at a health centre in Jammu and Kashmir’s Kishtwar town, prompting authorities to impose curfew and call the Army to maintain law and order in the communally sensitive region, officials said. 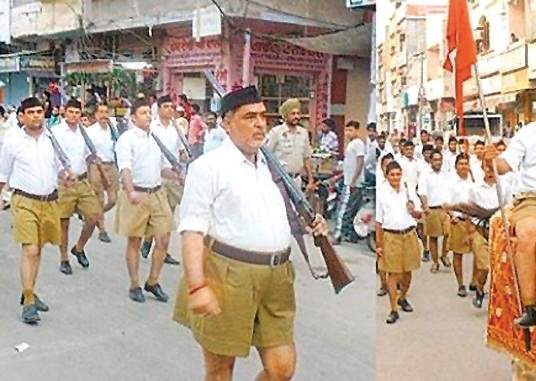 “We condemn the attack on RSS Prant Seh Seva pramukh J&K Chanderkant Sharma and his PSO in Kishtwar today. It was an attack to create fear psychosis among Hindus in this belt. But we will not be cowed down by such attacks and killings of our people”, J&K RSS chief Brig (Retd) Suchet Singh told reporters tonight at the RSS office here.

Brig Singh called for tightening of security in hilly district by saying there is a “security lapse” and there should inquiry into it.

“The militants want to create fear psychosis and trigger migration of Hindus from these hills areas like 1990 situation. They want to demoralize people. There designs will never be fulfilled,” he said.

Admitting that there is increasing efforts by militants from Kashmir to spread their arch to this region, he said the security forces need be more vigilant and SOP needs to be corrected by creating checking points, bunkers as existed earlier.

“The anti-national elements should be identified and arrested. But we have yet to bring to book the killers of BJP leader and his brother,” he added.

He called for handing over areas to army and deployment of forces in the belt.

“Some areas should be handed over to the Army. More security forces should be deployed and operation Allout should be extended to Kishtwar also,” Brig Singh said.

He said that senior RSS functionary Chanderkant was heart and soul behind the morale of Hindus in the belt. He was a medical assistant in Kishtwar hospital, the RSS leader said, adding he left behind his wife and two sons one studying in class 10 and another in class 7.

“Sharma was a force multiplier for the Hindus of the region during 1990, when militancy at its peak. he was made target by militants for keeping the morale of Hindus high in the area”, Brig Singh said.