You will not find anyone to shoulder the Tri-colour if article 35-A abrogated: Mehbooba Mufti 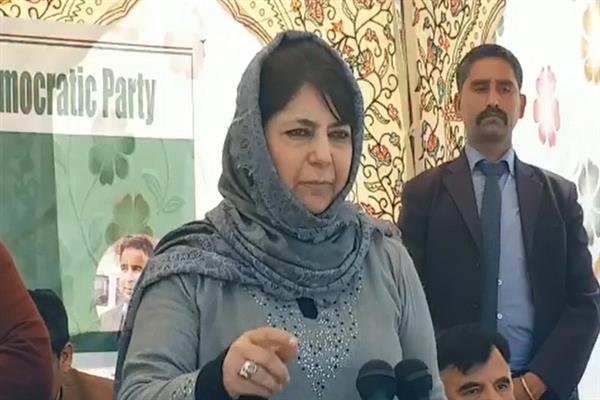 Srinagar: Former Chief Minister and President Peoples Democratic Party (PDP) Mehbooba Mufti has warned that no one will be left to shoulder the tri-colour, if article 35A is abrogated.

She castigated BJP Chief Amit Shah over his anti Kashmir remarks, stating that any fiddling with Article 35-A will turn the situation in Jammu and Kashmir apocalyptic and impossible to handle.

Addressing worker’s in north Kashmir’s Handwara, the PDP President termed it unfortunate that BJP is trying to reap electoral benefits out of the Kashmir situation and trying to tell their followers that by prosecuting, ridiculing and harassing Kashmiris, they are actually avenging the thousand years old Muslim rule in India.

She said that BJP and its ilk should know that Article 35-A since 1947 has been acting as a bridge between the state and rest of the country and if any damage is caused to this bridge, it will quash the very agreement on the basis of which Jammu and Kashmir acceded with India.

“Even we the mainstream parties who swear by the constitution of the country and of the state will have to rethink which way should we adopt. You will not find anyone to shoulder the tri-colour. Even we, the mainstream political groups will not be able to shoulder the national flag of the country in Jammu and Kashmir,” said Mehbooba in her speech.

She added that the state of Jammu and Kashmir secured its unique position and same cannot in any way be contested in any court of law. “Article 35-A is a matter of life and death for us. No one has the authority to challenge the very identity of people of the state in any court across the world. This sword cannot dangle over our heads all the time,” Mehbooba said.

The PDP President said that those launching assaults on state’s integrity on multiple fronts shouldn’t live with the notion that they can any longer terrify people of Kashmir with such tactics.

“Article 35-A is part of Article 370 which confers certain rights to citizens of the state. By launching assault on Article 35-A, there are attempts being made to change the Muslim Majority character of Jammu and Kashmir,” Mehbooba said.

She added that those who demand that Jammu and Kashmir’s special status should be scrapped must understand that that the relation between JK and India is based on Article 370. If this special status is scarped, it will nullify the legitimacy of accession of JK with the Indian Union, Mehbooba said.

Speaking on the occasion, Dr Mehboob Beg, in his address reminded NC Vice President Omar Abdullah how his grandfather traded the position of state’s own PM with the CM and now the grandson is seeking votes to undo the same.