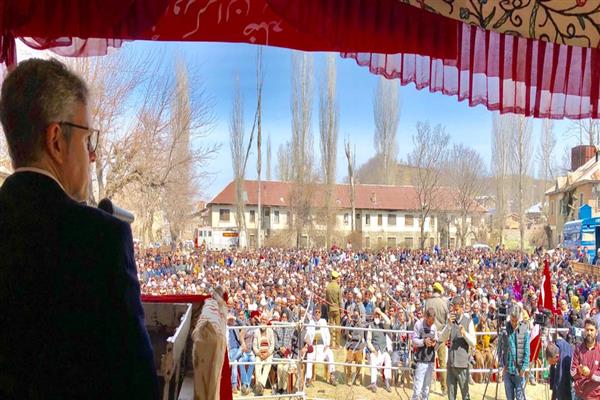 Srinagar: Jammu and Kashmir National Conference vice president Omar Abdullah on Tuesday asserted that what good was achieved in his stint as chief minister was put into an abyss by the former PDP-BJP coalition government in the state saying that the state of affairs of the country too bore the brunt of the imprudent policies of the Modi led BJP government.

Addressing a public meeting at Kwaja Bagh, Baramulla party Vice President said that during his tenure as chief minister there was a marked difference in the security scenario of the state. “However what good was accomplished in state suffered a setback during the reign of former BJP-PDP government.  When I took over the state as Chief Minister, I remember how there used to be a gun man on every military convoy to manage the traffic. Then we managed the situation and gun was replaced with a baton. Eventually I took up the matter with army officials and impressed upon them about the negative impact of having a military man “Danda man” flauting Baton. Slowly and steadily the baton were snatched from the military men managing the fleet of military convoy.  By 2014, the situation had improved to a degree that no person used to be present managing the convoy. Such was the situation we had bequeathed to the state.”

“Today we see forces thickly guarding every unit area of our highways. Private transport is not allowed to ply near the army vehicular fleet; other vehicles aren’t allowed to drive within fifty meters of the convoy. This is what BJP-PDP has done to our sense of security, our highways. Today it takes 2 hours to reach Baramulla from Srinagar, such is the situation,” he said.

Flaying some sections of Indian media for drumming the beats of war, Omar said, “Those who speak of war sitting in TV studios don’t know the repercussions of war. It is the people of our state that has to bear the brunt of tense situation between India and Pakistan. It is the people of our state who directly come in the line of fire between India and Pakistan. Those pitching for war don’t suffer from the consequences of it.”

Flaying Mehbooba Mufti for her assertion wherein she had said that she will protect the special status of the state, Omar said, “How can PDP and its president save the special status of state?  Look at her five years of stint in power. The GST bill we have been resisting was implanted by her only. The new tax regime has affected hoteliers, taxi drivers, craftsmen, edibles, books and other marginal traders. We have cautioned her about the implementation of GST but she didn’t heed our pleas. There has been steep increase in the price of cooking gas cylinders; poor families find it very difficult to refill their cooking gas cylinders. How can PDP protect our special status, it was PDP that destroyed the financial autonomy of our state?”

“Now it is for us to make certain if we want to let the situation continue as it is. Our children are being attacked across the country. The tourist industry too is in shambles. Our kids were being attacked upon and intimidated in Uttrakhand, Punjab and other places; we unfortunately didn’t see any action or word of condemnation coming from Prime Minister for ten days. For past four years we have seen our special position were attacked at. Do we desire to see our kids being intimidated, if not, then we have to make sure that BJP-PDP is given a befitting reply in the forth coming LS elections. The work which was to be done by Prime minister was undertaken by our Sikh brothers; our Sikh brothers came out and carried the rescue operation. They secured the lives of our youth studying outside state.”

In a frontal attack on Mehbooba Mufti, Omar asked Mehbooba what action was taken by her on the cancellation of fake state subjects. “The case was brought to Mehbooba’s notice by my colleague and former minister in her Cabinet. In a bid to save her government and chairs didn’t took any action on the issue. Can she be trusted with the protection of state’s special status?  On every conceivable parameter she failed, now she is vowing to protect the special status of state given the fact much damage was done to it in her tenure.”

Omar while censuring the divisive agenda of polarization of electorate on ethic and other prejudices, Omar said that such a trend will prove harmfull to the unity of sate. “We don’t ask votes on religious, ethnic considerations, our candidate for Baramulla Muhammad Akbar lone is the most appropriate candidate for Baramulla constituency, who will no stone unturned to raises issues concerning our state.  No it is imperative for all of us to send him to parliament with a resounding victory, with a huge margin. It is he who will fight for our special status and other interests of state.”