Will revoke ban on JKLF, JeI if PDP comes to power: PDP president 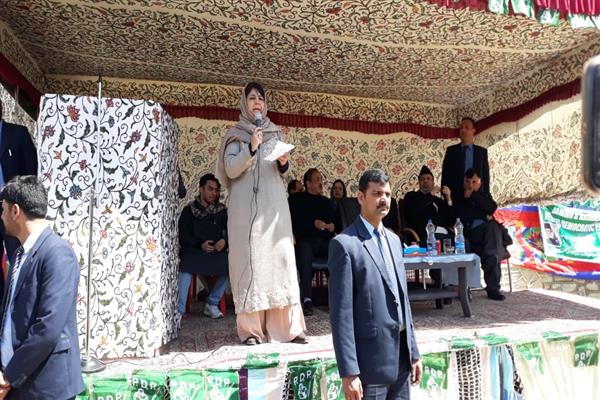 Srinagar: Reiterating that muscular policies will only prove counterproductive in tackling the present crises in Jammu and Kashmir, former Chief Minister and President Peoples Democratic Party (PDP) Mehbooba Mufti said on Tuesday that if her party comes to power, it will scrap the ban imposed by the government on JKLF and Jamaat-e-Islami.

Addressing the workers convention in north Kashmir’s Baramulla, Mehbooba said that banning organisations like JeI and JKLF will have far reaching consequences and such measures only increase the level of alienation and frustration among the people.

She said that PDP has a clear stand that ideas cannot be chained, banned or killed. “In democracy, ideas are allowed to flourish and not choked. By taking such undemocratic, unconstitutional and unnatural measures, the government in actual is trying to show its electorate how tough it is against the Muslims and against Jammu and Kashmir,” Mehbooba said in her address while assuring that if PDP comes to power, it will make strenuous efforts to undo the BJP’s wrongs and revoke the ban imposed on Jamaat-e-Islami and JKLF.

She said that it has been the prime agenda of the PDP that the muscular approach will not take the state anywhere as this has been tried for many decades and hasn’t yielded any positive outcome. She said that it is unfortunate that some people still believe in the efficacy of these methods and are trying to repeat the old mistakes which will be meaningless and will prove counterproductive.

Hailing the decision taken by Pakistan Prime Minister Imran Khan to open Sharda peth for Hindu devotees, Mehbooba said that such opportunities need to be grabbed at an earliest so that the dream of a peaceful South Asia is realised without any further delay.

She said that by opening of Sharda Peeth in Kashmir across the LOC, Hindu devotees and pilgrims could go without hassle as it was a major centre of learning at par with the ancient seats of learning Nalanda and Taxila. “The reality must dawn upon those at the helm that trigger happy approach will not solve the Jammu and Kashmir problem. Confidence building measures, dialogue and reconciliation are the only ways that could protect the state from an apocalypse,” Mehbooba said.

The PDP President also cautioned that any fiddling with the special status of Jammu and Kashmir is fraught with dangerous consequences and has the tendency to turn the state into a war theatre.

“PDP government in spite of being in coalition with the BJP didn’t allow the later to fulfill its nefarious agenda in Kashmir and the government employed country’s best lawyers for the protection of Article 35-A in the Supreme Court. We strongly believe that the constitution of the country has enough space to accommodate aspirations of Jammu and Kashmir but unfortunately the atmosphere is fouled by the attempts being made to fiddle with its special status and louse of mistrust has risen out of that,” Mehbooba said, adding, that any such attempt made through the legal or administrative route will be unacceptable to the people pf the state.