Srinagar: Commuters Thursday morning expressed resentment through honking the horn of their vehicles when they were stopped for half an hour to pave way for a CRPF convoy near TRC Srinagar. 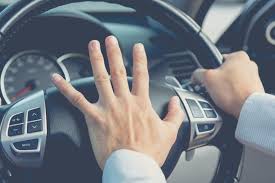 Reports said that at around 9 in the morning, a CRPF convoy brought traffic to a grinding halt for half an hour on TRC-Abdullah Bridge stretch. School children who were on way to school got trapped in the middle of the traffic jam while a grid lock of vehicles with people on board created an uncomfortable situation.

Couple of commuters was seen arguing with the security personnel on the road side. Commuters insisted that convoys should be on the road during wee hours and not at the time when employees and students are on way to their destination.

The agitated commuters honked the horns of their vehicles for more than 10 minutes to register their protest. “It has become a routine here to harass people in the garb of the security. Is it right time for a convoy to pass through the road? Why can’t authorities ask them to pass during wee hours? Children and employees suffer the most,” said a commuter.

Due to convoy movement, there was traffic terror everywhere.”Government should come up with a proper plan to allay the sufferings of the people,” said an elderly person.(cns)