Dialogue not muscular approach will bring peace in Kashmir: Mehbooba 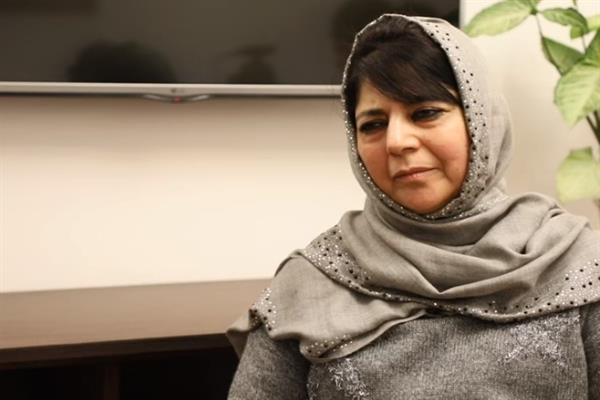 Srinagar: Former Chief Minister and President Peoples Democratic Party (PDP) Mehbooba Mufti reiterated that result oriented dialogue with all stakeholders is the only way to make peace in restive Jammu and Kashmir permanent.

According to the PDP spokesman, Mehbooba on Wednesday addressed Bandipora workers’ convention in which she asked the party functionaries to work with greater coordination and strengthen the party on the ground.

Mehbooba stated the PDP has always been a staunch advocate of political process for the resolution of Kashmir and has been asking the Government of India to hold meaningful dialogue with Hurriyat, Pakistan and with other stakeholders.

“This muscular approach and political patch work will not take us anywhere as this has been tried for many decades and hasn’t yielded any positive outcome.It is unfortunate that some people still believe in the efficacy of these methods and are trying to repeat the old mistakes which will be meaningless and will prove counter productive,” she said.

She further stated that people are well aware of the policies of the PDP and how the party has always preferred its principles over power and didn’t allow BJP to take any inroads on the constitutional position of the state.

Mehbooba added that the state of Jammu and Kashmir as part of the Republic secured its unique position and same cannot in any way be contested in any court of law. She said that Article 35-A is a matter of life and death for the people of Jammu and Kashmir and that no one has the authority to challenge the very identity of people of the state in any court across the world.