By Dawn in Islamabad: India with the backing of Israel and at the peak of its standoff with Pakistan had last week planned a “dangerous attack” to be executed from its Rajasthan airbase, a highly placed government source revealed on Monday.

Timely intelligence and backdoor messaging made it clear to India that a befitting response would be given if it were to go ahead with the planned attack, one which would possibly take the countries to a “point of no return”.

And as the nuclear armed neighbours wound up a tough week in what was possibly the most near-war situation the two have been in since decades, no one is quite sure of what to expect next.

However, the top civilian source observed that the next possible escalation by India would not be in terms of ground, air or missiles — but more likely in the form of a hybrid conflict in the nature of militant attacks, economic measures etc.

In fact, what India termed, and thus legitimised as “pre-emptive non-military strike” last Tuesday, was a first of its kind violation of international border and Pakistan’s airspace since 1971.

It was followed by Pakistan taking down two Indian aircraft in a dogfight, leaving one Indian pilot dead and another captured — who was later released as a unilateral gesture of peace. 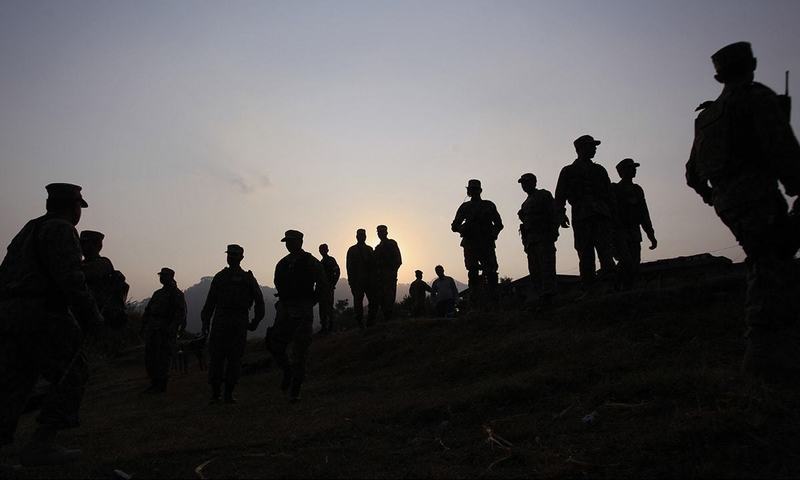 Since then, Pakistan and India have continued to exchange gunfire across the Line of Control (LoC), only having eased in the last 24 hours.

When inquired by this correspondent if this can be seen as a sign of de-escalation, the chief military spokesman said, “There is a relative reduction in CFVs as compared to heavy exchange of fire during the week”.

“However, based on this apparent ‘strategic restraint’ during the last 24 hours, we cannot lower our state of vigilance and readiness. We have to stay prepared against any misadventure,” explained Maj Gen Asif Ghafoor, director general of Inter-Services Public Relations.

In the other sitting with the top government source, there was considerable pride in Pakistan having thus far shown inordinate maturity and a genuine desire for peace and having dominated all spheres of the standoff in this precarious situation initiated by India in what the source saw as [Narendra] Modi’s war politics.

This highly placed government source recognised the “Modi dilemma” as one where the Indian prime minister continues to beat war drums leading up to elections this May, thus the Catch-22 situation the Indian PM has put himself in means “we are not out of the woods just yet”.

The source briefed a handful of journalists on the “dangerous attack” India had planned with the backing of Israel from its airbase in Rajasthan, located about a 100km from the international border with Pakistan. Timely intelligence and backdoor messaging made it clear to India that a befitting response would be given if it were to go ahead with this plan, one which would possibly take the two states to a “point of no return”.

The source credited Pakistan’s premier intelligence agency, ISI, as “one of the best in the world” and feared the next possible escalation by India would not be in terms of ground, air or missiles, but more likely in the form of a hybrid conflict in the nature of militant attacks, economic measures, etc, against Pakistan.

The same was reiterated a day earlier by military sources this correspondent spoke to.

The Pulwama trigger coupled with diplomatic plus political coercion had India embark on what is now being referred to in military quarters as the “New Normal”. India by this new approach assumed punitive deterrence would be accepted by Pakistan.

In what is largely seen as a dangerous precedent set by India — with far-reaching and worrisome consequences — New Delhi also ironically is not in a position to take one more blow, with both elections overhead and Pakistan continuously preaching and exhibiting the first two stages of the three dimensions of war, deterrence and avoidance.

This double-edged sword dangles overhead, as the ball remains in India’s court, and the world’s eyes upon it. Civilian and military leadership of Pakistan regret what they see as India having taken the course to a broad spectrum dominance of Pakistan with acquiescence of international allies.

Standing at a critical juncture in our history and making significant economic headway, the topmost government source recognised that proscribed organisations were only adding to Pakistan’s problems. Statements in the past against such outfits were made under pressure and lacked political will.

Also present on the occasion, Finance Minister Asad Umar revealed that on ground work against proscribed organisations had started before the Feb 14 Pulwama attack in India-held Kashmir. In the second last meeting of the National Security Committee (NSC) the decision to speed up the progress against these organisations had already been taken and his ministry had decided to set finances aside for these elements to be successfully rehabilitated post deweaponisation.

A day earlier, the ISPR director general told this scribe, Pakistan had decided as far back as 2014 to put an end to such organisations as they “don’t have currency today and are transforming a just Kashmir cause into terrorism”.

At the NSC meeting it was unanimously decided between the civilian and military leadership that not responding was out of the question. An unemotional, rational decision albeit in the domain of irrational (read nukes) had to be taken, and the country’s leadership was on the same page.

Pakistan had already offered “investigation sans any qualifier” with regards to the Pulwama attack and shown willingness to discuss terrorism; signs of unprecedented maturity and willingness for conflict resolution on behalf of Pakistan. The government source on Monday felt that India’s intention lay exposed in its handing over of the Pulwama dossier two days after having attacked Pakistan. The dossier apparently “lacks actionable evidence” but is under review by both the Foreign Office and ISI.

In the midst of serious diplomatic manoeuvrings under way, the spokesperson for the military was very clear about two things. Firstly, if India chooses to escalate from here, it will not be about India Pakistan anymore, it will be about the region. Secondly, India shall not be afforded any face saving at the cost of Pakistan’s integrity and sovereignty.

The lowest of the escalation ladder being no war and the ultimate, nuclear; India has right now, what every country enjoys at each step of the escalation ladder, an exit, if it so chooses (wisely at that) to let things be from here on. Unfortunately, that might not be the case as felt by the ISPR director general, “India emotionally is not prepared to take this exit point”. All weekend, India has been in pursuit of “pumping, luring, provoking” Pakistan out of the “performance, capacity and moral ascendancy” it continues to display. India seemingly has returned “back to the drawing board” to ascertain what kind of response to save face with. However, what remains critical are exit points, knowing when to back off, as any further adventurism by India shall be “too dangerous and critical”.

With regards to his question “you know what National Command Authority means” last Wednesday, the ISPR director general was unambiguous in clarifying “whereby Pakistan will always choose peace over war, dialogue over hostility, be very clear, we shall never compromise on defence of our beloved motherland” so for the time being Pakistan’s “alertness is on high”. (Courtesy Dawn)