Geelani convenes ‘Majlis-e-Shoora’ of Hurriyat (G); ‘participation in elections tantamount to treason with blood of martyrs’

Srinagar: Octogenarian Hurriyat patriarch Syed Ali Geelani on Thursday convened a Majlis-e-Shoora of Hurriyat Conference (G), at his Hyderpora residence and discussed the overall political situation in Jammu and Kashmir.

The Shoora expressed grave concern about the deteriorating condition of the Kashmiri prisoners in and outside state, particularly Tihar. It said that despite repeated statements and media reports there seems to be no respite from the pathetic and humiliating conditions faced by inmates.

Terming Kashmir dispute a long pending political and humanitarian issue, the Shoora said that it must be settled by exercising free and fair plebiscite.

The meeting condemned the nocturnal raid and brutal attack by forces on TeH District President Baramulla Mufti Abdul Ahad. “He is a well known social and political leader and such barbaric assault on him is unbearable and unacceptable,” the leaders present in the Shoora said according to a statement issued by the amalgam.

In his presidential address, according to the statement, Geelani termed Kashmir issue a globally accepted dispute wherein the people’s right to self-determination is not only acknowledged but confirmed by more than a dozen resolutions, but persistent denial of our basic rights has turned this beautiful piece of land in a battlefield where every day killings, crackdowns, arrests, nocturnal raids and bulldozing residences has became a routine. 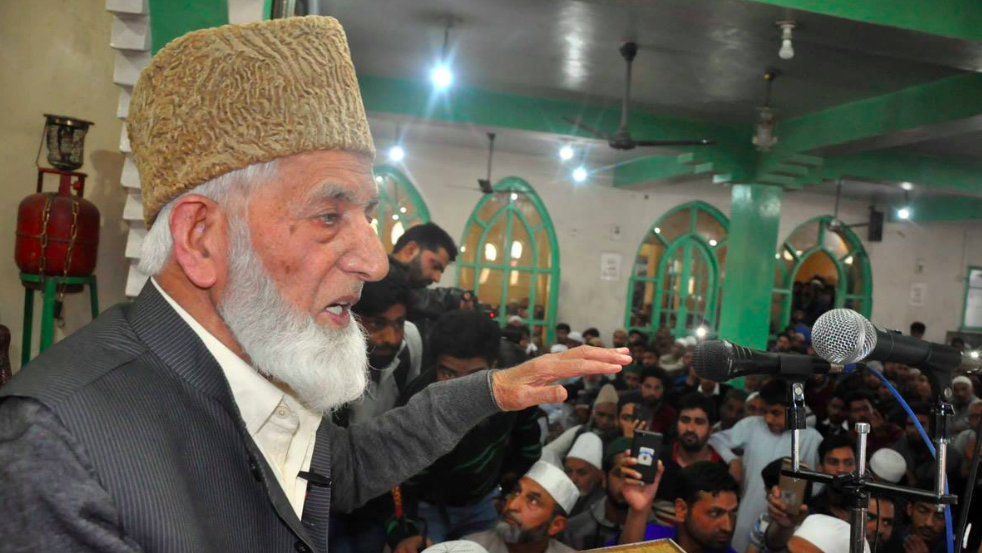 “Geelani expressed his serious concern about the pathetic condition of political prisoners and said that despite being political prisoners they are denied every right guaranteed by the national or international jail manual. Revengeful attitude of the rulers in Delhi has crossed every limit of heartlessness and insensitivity. They willfully prolong their stay in jails through their judicial victimization.”

Geelani in a passionate appeal to the civil society, other sects of the state and media fraternity particularly to print and electronic professionals and columnists asked them to highlight the “gross violations” against the political prisoners by the “oppressor”.

Elaborating, he said that India fails to uphold its own obligations and has used every weapon to crush and quell the freedom movement, but the resilience and determination of the people has unnerved them and they take the revenge from the pro-freedom people in their custody. “They use their venomous attitude to humiliate them and put their suffering families to the psychological stress.”

He said that these means and revengeful acts have failed to deter any conscious freedom loving person from the right path.

Geelani, who continues to be under house detention for past eight years, said that these prisoners continue to be in custody despite repeated court orders quashing their detention, but “in this lawless land only military might and rule of gun prevails to silence every sane voice.”

He said that every tyrant and oppressor has has to vacate the land, and “our oppressor” too will have to face the same fate —time and history has proved it to the satisfaction and encouragement of the “oppressed” population.

Appealing people to boycott the upcoming elections, Geelani asked people to exhibit steadfastness and keep away from upcoming sham elections. He said participation in these elections tantamount to treason with the blood of our martyrs.

“Indian authorities are misleading world community by portraying people’s participation in elections as a verdict in their favour,” he said. “It is prerequisite to convey a strong message to world community that we pursue a cherished mission of freedom and in no way, justify, defend or favour these elections,” he said.