Read here: AMU students submit Memorandum to President of India on situation in Jammu and Kashmir

Srinagar: The students of Aligarh Muslim University on Wednesday held a strong protest demonstration at the varsity campus against the deteriorating situation in Kashmir valley and the recent civilian killings by government forces in Pulwama district.

Reports said that the students under the banner of AMU students association condemned the civilian killings in Kashmir and pressed for the resolution of Kashmir dispute. The students also wrote a memorandum to the president of India regarding the situation in Jammu and Kashmir.

Seven civilian were killed by government forces in Sirnoo village of Pulwama district in southern Kashmir last Saturday. The killings were termed as a massacre by former Jammu and Kashmir chief minister Omar Abdullah. “It is a massacre,” he tweeted. 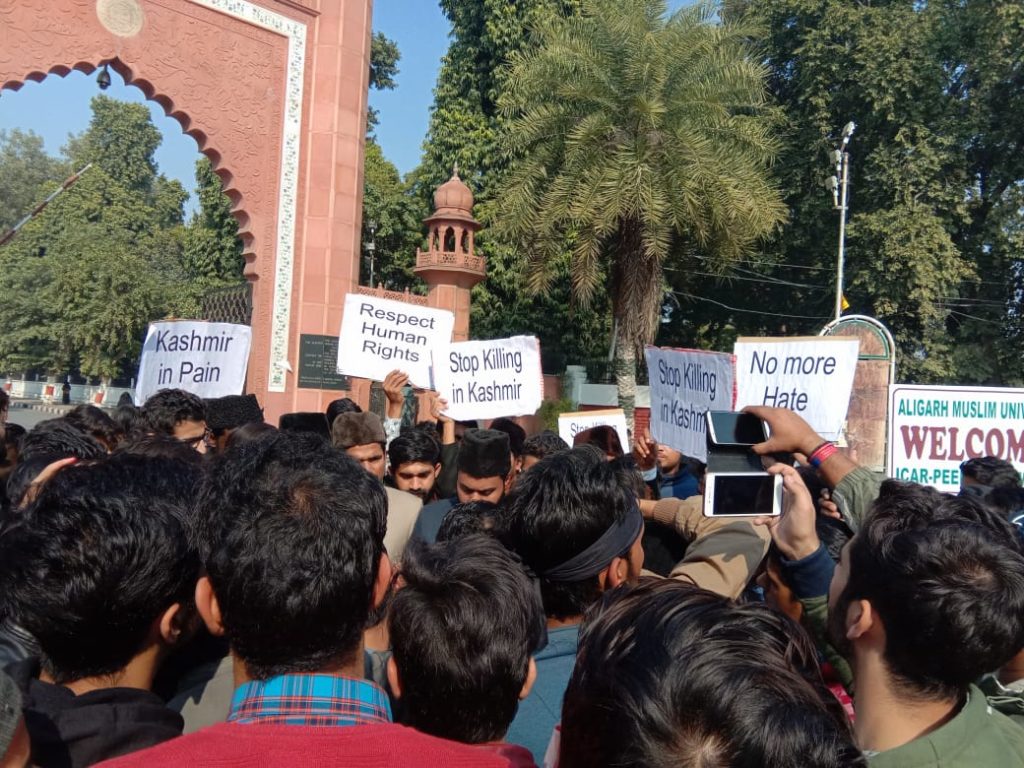 The killings also received sharp criticism from international organisation including Amnesty International and Organisation of Islamic Countries (OIC). OIC termed it an act of terror.

In the interest of our readers, the Memorandum is produced verbatim:

Subject: Memorandum regarding the deteriorating situation in Jammu and Kashmir

Aligarh Muslim University Students’ Union is shocked by the escalation of violence in the state of Jammu and Kashmir. The killing of 7 civilians on Saturday, 15 Dec. 2018, in the Pulwama district of Jammu and Kashmir by the armed forces is unbearable and highly regrettable. All of the civilians had bullet wounds above their waist – on head, abdomen or chest. A bullet had made a deep hole in the neck of one of the civilians. Since last three days, the majority of the places in the state are observing shutdown or have been put under curfew like restrictions. As per the information of Ministry of Home Affairs, 587 incidents of violence have been reported in J&K in 2018 alone, and that civilian deaths have increased by a staggering 167% as compared to 2016. India’s conscience cannot attain peace after killing the unarmed civilians.

Only weeks before, Hiba Jan, the 19 month-old baby was hit with pellets in her eye, when she was in the lap of her mother in her native village, Kapran in South Kashmir, and doctors are not sure about the future of her eye sight. Use of pellet-firing shotguns, which are 12-gauge pump-action shotguns that fire metal pellets have dented the image of India at the international level after they caused death of over a dozen people and injured more than 6,000 including nearly 800 with eye injuries. These days the visuals of the burning houses in the cold winter are also disturbing. The situation in Kashmir is not an ordinary one.

Even the United Nations, in its report on the situation of Human Rights in Kashmir has said, ‘The killing of civilians between 2016 and 2018 raises the question of whether security forces resorted to excessive use of force to respond to protesters, some of whom were throwing rocks. International human rights groups have raised the issues of excessive force and are questioning our adherence to the application of national and international standards on the use of force’.  India is seen in a bad light at the international level when it comes to the handling the state of Jammu and Kashmir. The report by UN Office of the High Commissioner for Human Rights (OHCHR) earned a fierce denial by the Ministry of External Affairs (MEA), however the fact remains that all is not well in Kashmir, and that denial is not an answer to the situation. The deteriorating situation in Kashmir calls for a serious attention.

We find the situation in Kashmir very explosive and going out of hand. The civilian population has shown a deep resentment towards the iron fist policy of the Government of India. The local mainstream political parties have failed to govern the state and the Governor rule is about to turn into Presidential rule in next few days. The absence of political engagement has worsened the situation. The local elections have been boycotted by most of the mainstream parties.

The Students’ Union takes this occasion to address your Excellency as the head of the state, to take serious cognisance of the situation in Kashmir. People cannot live under consistent political vacuum and there is an immediate need of the intervention from your esteemed office. 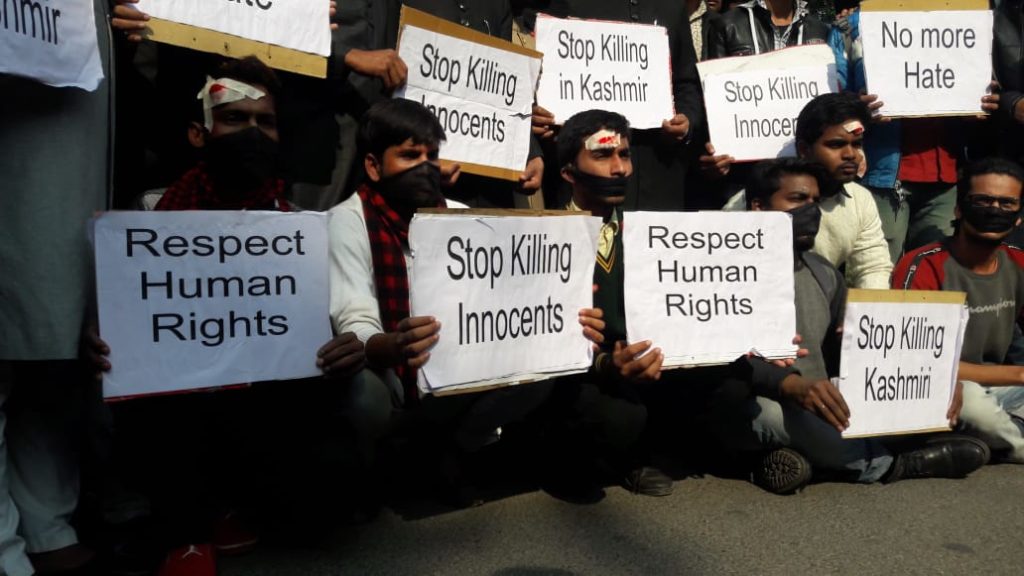 Aligarh Muslim University Students’ Union requests your highness to take some immediate measure including the following to address the crisis in the state of Jammu and Kashmir: