I am called a bitch by these malicious losers: Woman accuses ‘Kashmir Women’s collective’ of hurling sexist slurs

Srinagar: The ‘Kashmir Women’s Collective Group’ (KWC)- which claims to be fighting for the rights of women- is under fire for using sexist slurs against those women who are expressing strong disagreements against the group for starting the #Metoo campaign in Kashmir using controversial/ objectionable means and methodology.

“Thanks Shazia Nazir Bakshi. Succinctly put. I’m called a bitch by these malicious losers!,” posted Rehana Kounser on Facebook, who had earlier questioned the  KWC for releasing the list of “accused” allegedly involved in the harassment of woman.

Kounser was responding to Shazia Nazir Bakshi on KWC’s page where in she had taken the group head on for using abusive language against the women who were objecting the way they were working for the #MeToo campaign in Kashmir.

Like many netizens, Kounser wrote on the KWC page in response to the list of accused allegedly involved in harassing woman in Kashmir released by the group.

“Every case should be decided on its own merit because otherwise the genuine cases are simply waved off as another slander. Whether it is a journalist/ officer/ politician or any man who molests/rapes a woman the important thing is to stay away from slander. Because it will backfire and the genuine concerns of KWC or any other organisation will fail. The molesters and rapists deserve the worst possible punishment but women who slander should also not go unpunished.” 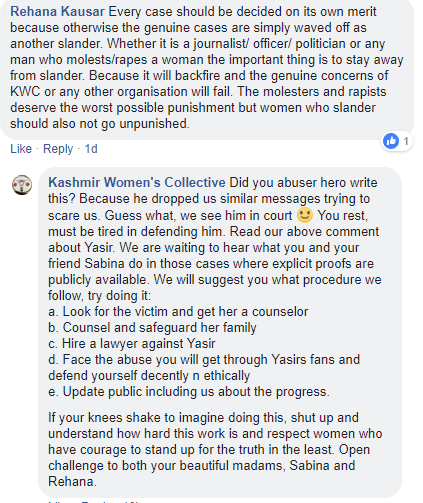 The fight became more sharp when Shazia Nazir Bakshi wrote to KWC page under the same post that she was taking them head on while mocking at their abusive language against woman in disagreement with them.

“Calling women- the ones you “claim” to speak for -illiterate, middle aged, have beens, fan girls, women who cover in fear with shaky knees, who get “value” in “friendship” with men . This is your level of maturity and sensitivity?” Bakshi shot at KWC 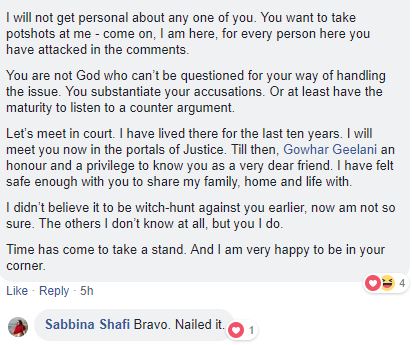 The KWC termed Bakshi’s post as “non-sense” and wrote: 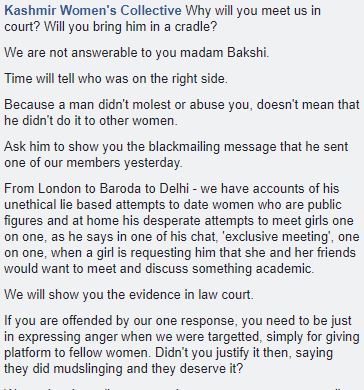 Bakshi shot back while asking them to produce evidence in the court of law: 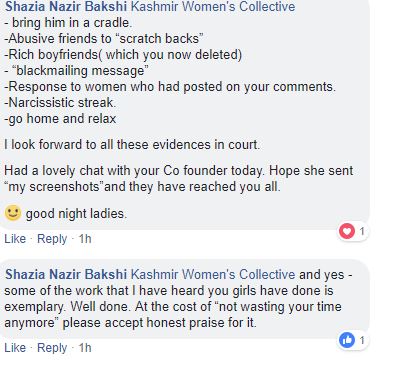 Not only women, the men also accused KWC of witch hunt and black mail by issuing a list which does not contain names of the victims, neither any substantial evidence to prove that it possesses the real “testimonies” of victims.