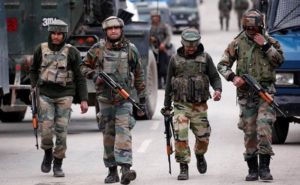 Srinagar: Two militants of Lashkar-e-Toiba outfit were killed in a gunfight at Galoora area of Handwara in north Kashmir’s Kupwara district on Monday.

Soon after the joint team of forces fired several gunshots amid the cordon leading to an encounter, they said.

An army officer that the gunfight started after a cordon-and-search operation was launched in the village at around 2:30 am following specific information about the presence of some militants.

He said that two militants of LeT were killed in the operation.

“The bodies of the deceased were recovered along with arms and ammunition”.

Sources identified the slain militants as Liyaqat of Harwan Sopore and Furqan of Handwara.

Meanwhile, in wake of the gunfight, authorities snapped internet services in Handwara parts while as district administration Kupwara has decided to suspend class work today in GDC Handwara and all Higher Secondary Schools of Handwara, Mawar and Langate Zones as a precautionery measure. (GNS)