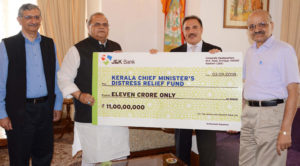 Srinagar: The Jammu Kashmir Bank touted through media that it has donated 11 crore rupees for the Kerala flood relief fund.

But, no one knew where from the bank collected the money and donated it to the flood relief fund- neither the employees nor officers of the Jammu and Kashmir bank.

It is now being revealed that the bank forced upon its decision on the employees and the officers when it resorted to six day salary cuts..

“After three days, I came to know that the bank authorities have cut my six days salary which amounts to 20 thousand rupees. I realized it when we were sent a circular that on August 21 the bank had donated 11 crore rupees to the Kerala relief fund,” a J&K bank manager working in Srinagar told The Kashmir Press.

“They cut my six days salary without my consent. So they did it with others. I was helpless. I was notified about the decision on August 25 through a circular after the decision was taken”.

The JK bank employees said the imposed decree on the employees was completely unacceptable and smacks of unprofessional attitude exhibited by the bank.

“Where on earth such things happen that your money is taken out of your account without informing the owner. It amounts to stealing,” a group of JK bank employees said.

The employees were also aghast over the bank’s decision to donate Rs. 50 lakh towards the NDTV relief fund for the Kerala flood victims.

“We hope our money is not taken again without informing us,” employees said.

JK Bank Public Relations officer, Sajjad Bazaz, however, refuted claims that the 11 crore rupees were collected without taking the consent of employees and officers of the bank.

“These allegations are totally baseless,” Bazaz told The Kashmir Press.

“The head of JK bank officer and employee association, representing the employees and officers, had given consent for donating six days salary towards the Kerala relief funds. These bodies are empowered and can take decision on behalf of employees”.

He said the employees and officers association of the bank decided to donate money after JK bank Chairman donated two month salary for the relief fund.

But, one of the former president of JK bank officer association said the two bodies have no right to decide on salary cut issue as they were meant just for the welfare of employees.

“They have no authority to arbitrarily decide on salary cuts. It is illegal,” the former president said.

“Both the employee and officers bodies are unregistered. They have no constitution. So there is no question of representational empowerment. It is just a group of people meant to talk about the employee welfare”.

Another JK bank officer said if the bank said took the consent from two bodies, why then the respective associations did not call the general body meeting to decide whether to donate the money  or not.

“This might have happened because the general secretary and president of officers association were given favorite postings at Residency road and Lal Mandi. One is running the branch worth 600 crores while the other is running of Rs 200 crore,” officer said.

“No one is bothered about employees. Everyone is after his own personal interest”.