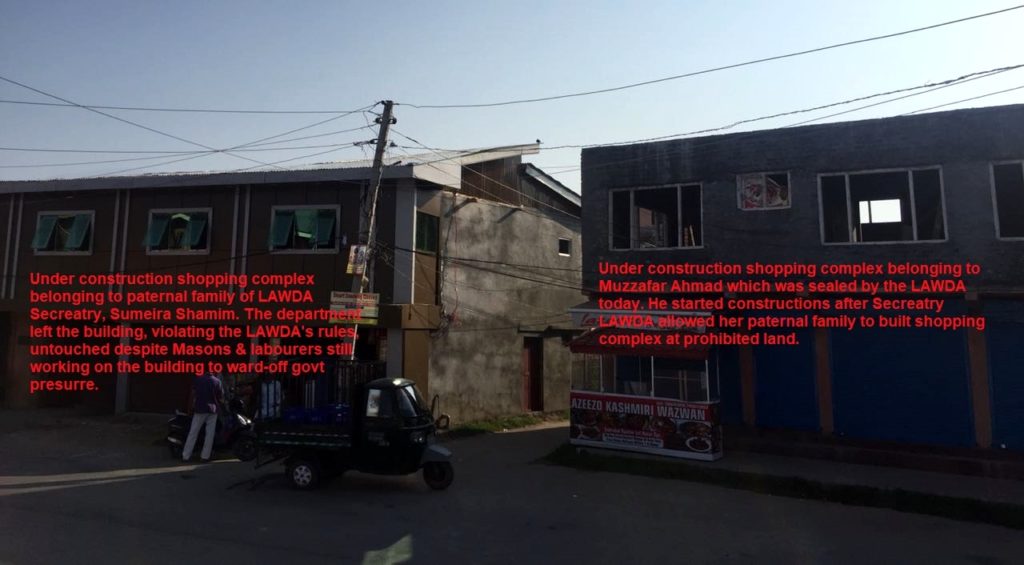 LAWDA acts selectively: The shopping complexes standing next to each other. One is sealed, another remains untouched as it belongs to the paternal family of LAWDA’s Secretary

Srinagar: Under pressure from the government, the Lakes and Water Ways Development Authority (LAWDA) has finally swung into action, but the department turned a blind eye towards the multi-storey complex built by the paternal family of Secretary LAWDA, Sumera Shamim, that is being constructed in the prohibited range of Nigeen Lake at Kanitar.

Although the department early Thursday sealed the under construction multi-storey shopping complex located next to the complex constructed by the family of Sumera, the construction belonging to her family stands left out.

“The LAWDA sealed the under construction structure belonging to one Muzaffar Ahmad,” sources said, however, they said, “The complex belonging to the secretary’s family stands untouched.”

Following The Kashmir Press report as to how the Secretary LAWDA, Sumera Shamim, allowed her paternal family to construct a shopping complex in clear violation of the guidelines laid by her own department at Kanitar Hazratbal, the government pulled LAWDA and the department swung into action.

“The LAWDA took action just to mislead the authorities who have piled pressure on them,” a source inside the LAWDA department said.

“But they took action against Muzaffar, not against the paternal family of LAWDA Secretary who were the first to start the illegal construction. This was done to ease-off government pressure so that things cool down. They wanted to mislead the higher-ups under the garb of taking action.”

The Secretary’s paternal family has almost completed the outer construction of the two storey shopping complex. The masons are working on the second story of the building while the construction is also going on inside the complex.

Sources inside the department said that none questioned the paternal family of Secretary LAWDA as it was a clear case of nepotism. “The department just turned a blind eye,” sources said.

“They construction happened in the broad day light and was continuing from past three months. The complex is located on the main road leading to Kashmir University, a few metres away from Kanitar chowk.

“It was Secreatry LAWDA’s family who violated the rules. The rest of the violators like Muzaffar simply followed them. LAWDA could not stop them as their own senior official had permitted her family to break the law. They had no moral standing to say no to the other violators”.

The LAWDA rules state that no construction can be allowed within the 100 metres area from the fringes of the Nigeen Lake.

Ironically, the construction is going on at the main road from where the demarcation of the prohibited 100 metres is laid by LAWDA.

To publicize the prohibition of any construction, Sumera’s department has erected poles at 100 metres from the lake fringe.