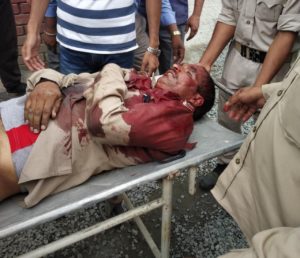 Srinagar: A paramilitary Central Reserve Police Force (CRPF) man who was injured in a militant attack near Fire and Emergency Services department in Batamaloo area of Srinagar on Tuesday late afternoon, succumbed to injuries.

Reports said that the militants opened fire upon the 23 bn CRPF party. In the incident, a CRPF trooper namely constable Shanket Lal sustained serious injuries and was taken to police hospital where he succumbed to injuries.

Earlier, SSP Srinagar Imtiaz Ismail Parray had said that the militants opened fire upon CRPF men in Batmaloo, resulting in injuries to a CRPF man.

A manhunt has been launched to nab the attackers, the SSP had said.

However, police spokesman in a statement issued today said, “terrorists this afternoon fired at the security forces personnel at Batamaloo near Fire & Emergency Services. Taking advantage of the  crowd in the area, the assailants  managed to flee.”

“In the process, two Security forces personnel got injured in the firing incident who were subsequently shifted to the nearby hospital for medical attention where one security force jawan Ct Shanker Lal of 23Bn CRPF succumbed to his injuries”.

“The other jawan has now been discharged from the hospital,” statement said.

“Police has registered a case and investigation in the instant matter has been initiated,” it said adding “Initial investigation into the case has led to some tangible leads on which police is working.”