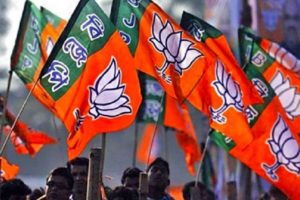 Srinagar: Bharatiya Janata Party (BJP) has said that elections in the state are meant for providing the basic amenities like Bijli (Power), Sadak (Road), Paani (Water) to the people and not for the political solution of Kashmir issue.

“The elections are not meant for the political solution of Kashmir issue but the polls are meant only to ensure basic facilities including Sadak, Bijli and Pani to the people,” BJP chief spokesman and state president, Ravinder Raina said.

He said that BJP was ready to for polls in the state.

“We are ready to start a campaigning for the polls. We are ready to go before the public for Panchayat and Municipal elections,” Raina said, adding, that if Governor dissolves the assembly and Election Commission of India (ECI) issue notification for polls, BJP is all set to go for elections any time.

Earlier, the BJP had stated that they will start their campaigning for the Panchayat polls from South Kashmir.

Raina said that the restoration of democratic institutions are inevitable for which the elections are mandatory as people are suffering at gross root level in absence of basic facilities.

The BJP state president, however, refused to comment over the sedition case filed by Anti-Terrorist Front of India (ATFI) against the former chief minister, Mehbooba Mufti over her remarks.

The case against Mehbooba was filed over her statement wherein she had stated that she had stated that more Salah-ud-dins and Yasin Maliks will be born in case New Delhi repeats 1987 and had also warned of dire consequences if PDP split by New Delhi. (Kashmir News Service)