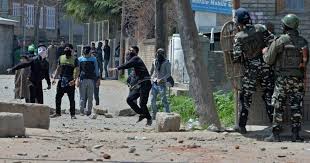 Srinagar: Authorities on Sunday suspended the Amarnath pilgrimage from Jammu for a day following a strike called by Joint Resistance Leadership to mark the second death anniversary of Hizbul Mujahideen commander Burhan Wani across Kashmir.

“In view of law and order situation in South Kashmir where three civilians died in clashes with security forces on Saturday and militant Burhan Wani’s death anniversary, no fresh batch of pilgrims was allowed from Yatri Niwas base camp in Jammu on Sunday,” said an official at the Yatri Niwas control room.

Only pilgrims already in Baltal and Pahalgam will be allowed to move towards the cave shrine.

Separatists on Saturday had given a call for strike on Sunday across Kashmir on the second death anniversary of the Hizbul commander. Director general of police Shesh Paul Vaid said the decision to suspend the yatra from Jammu was taken in view of the law and order situation in Kashmir.

Till date, 83,130 pilgrims have paid obeisance at the shrine. The current edition of the pilgrimage which began on June 28 has been blighted by bad weather. (UNI)