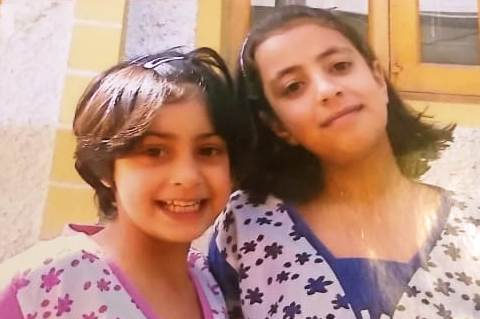 It was after eleven long months of a life like that of orphans, that we two sisters were able to see our beloved father – Advocate Aftab Hilali Shah aka Shahid Ul Islam, who is the Media Advisor to All Parties Hurriyat Conference (Moderate Group), presently languishing in Tihar Jail New Delhi.

Thanks to God, the Almighty and then to our mother,  a source of strength to us in these testing times, who motivated our Daddy to allow us to meet him in the jail.

Despite our strong desire, Daddy was reluctant to meet us there. We could realize the reasons of his reluctance only when we had his first glimpse.

We were shocked to see him in a very bad shape and worn out as he stood on the other side of a thick glass wall in between.

Leave alone touching him, the glass wall was too thick to let our words reach him. One intercom in the poorly-ventilated room was the only means to converse.

We could barely recognize him. A diabetic with hypertension, arthritis, the frail and pale looking dad has already lost 15 kgs of weight, because of denial of medicare.

We were told. It was but natural that our eyes welled up with tears as we could not bear with seeing his sunken eyes.

We could only feel his helplessness as he could not plant a kiss on our foreheads, his usual expression of love for us. We too felt very bad in absence of a physical contact with our loving and caring dad!

We the school-going kids, don’t know much about the India, Pakistan and Kashmir politics.

Our visit to Tihar Jail, reminded us of union of Kulbhushan Jadhav with his aged mother and wife in a prison in Pakistan.

During the 30 minutes telephonic interaction, we came to know that during this scorching heat of around 45 degrees C, he sleeps on the hard floor with mere two blankets provided by the jail authorities.

Exposed to insect bites, as marks were visible on his face, he doesn’t even have a pillow to get proper sleep.

Confined to the walls of 8×6 feet cell of High Risk Ward of Thiar Jail, he has been kept with criminals and drug addicts, which exposes him to obvious threat to his life.

But then, even meeting Daddy couldn’t end without horror. When we’re still to finish our conversation with him, the phone line snapped and the lights went off.

Not even a whisper from Daddy, it was all dark around as we stood dumbstruck, someone shouted time is over.

Thus we were denied even a chance to say good bye to our Dad! We pray that no daughters have to visit Tihar again. Aamin!

Sir, this is the sad story of our father and other Hurriyat leaders presently lodged in Tihar Jail.

Our father, a prominent political leader, is known for his pro-dialogue stance aimed at peaceful settlement of Kashmir, for which he was attacked twice by unknown gunmen, we never expected that peace-loving and moderate voices like him, will be treated so shabbily in the world’s largest democracy.

In the country where Prime Minister’s “Beti Bachao, Beti Padhao” slogan has rekindled hope among the hopeless disadvantaged girl child, we are unable to attend to our studies.

For us our home is like a prison, while Daddy has been jailed for months, with none of the allegations leveled against him having been proved.

We look forward to an immediate personal intervention by your good self.