Flood threat keeps the nerves of people bordering on panic 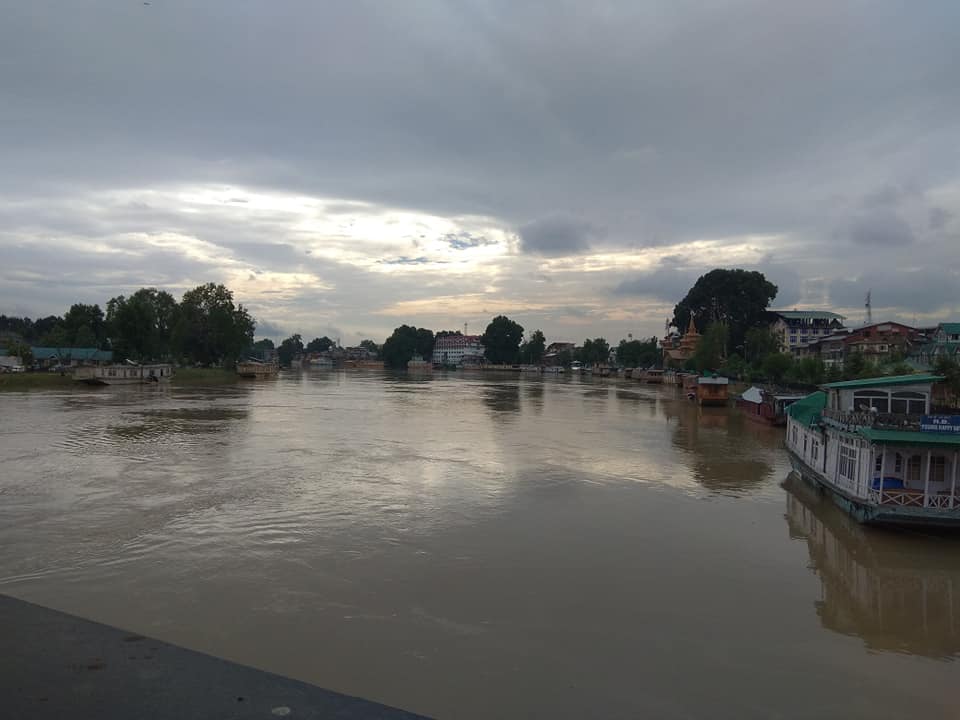 Srinagar: As the flood threat continues to loom large in the major rivers and streams of Kashmir, particularly in the south and central valley, the deluge scare kept nerves of people bordering on panic all along the day even as the Met department has predicted the weather to improve in next 12 hours.

The government has already sounded flood alert in southern districts of Kashmir, after the water level crossed the danger mark in river Jehlum.

Deputy Commissioner (DC) Srinagar, Syed Abid Rasheed Shah said that they have issued flood alert for low lying areas. He also appealed people living in low lying areas and embankments of river Jehlum in Srinagar to be alert and prepare for the evacuation.

“The level of the Gauge at RM Bagh is 20.82 ft at 9 am. We have issued a flood alert for low lying areas of Srinagar. People living in low lying areas & embankments of Jehlum in Sgr are requested to be ALERT & Prepared for evacuation,” DC Srinagar tweeted.

The local Meteorological department (MeT), Director MeT, Sonum Lotus said that the present weather conditions would improve in the State.

“The rains have stopped at some places and the weather would improve gradually not suddenly,” he said.

Lotus further informed that there were e chances of lights floods as well but there is no need to panic as the weather has improved considerably.

“People must not be panic and should remain prepare. The weather would further start gradually improving by this evening but the intermittent rains may continue,” he added.

On the other hand, many residents, who live along the Jhelum banks, experinced inundation of their houses and several people have to be evacuated for safety.

Similarly, the reports of water pooling in backward of houses were received from Sonwar and Qamarwari.

“The banks of river Jhelum got breached at various points in Sangam area due to rising water level. On the receipt of this information, a team headed by Division Officer of Police Post Sangam rushed to various spots and started the preventive works,” SSP said.

Meanwhile a teen died after being washed away by flood waters at Bemina while he was rescuing a dog from drowning.

The boy, identified as Asif Ahmad of Nagrota Jammu, drowned while saving a dog from drowning in Bemina flood channel.

Ahmad, according to reports, was putting up in a makeshift tent along with his family at Tengpora.

Meanwhile, the officials informed that Divisonal Commisoner Kashmir has asked all the officers of line departments to mobilize men and machinery for making the Emergency Centres (EC) functional identified at different location in the Srinagar city and Pampore.

In a meeting held at the Raj Bhavan early in the morning, Governor N.N. Vohra reviewed the situation arising from the increasing water levels of Rivers Jhelum, Tawi and other major Nallahs in both regions of Jammu and Kashmir and the advance preparations which are required to be taken by the Administration.