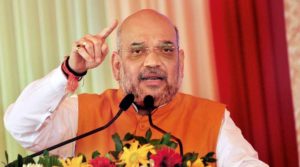 Delhi: Days after BJP pulled out of the PDP-led coalition regime in Jammu and Kashmir, BJP chief Amit Shah will be on a day-long visit of the Jammu region and also address a rally and celebrate Shyama Prasad Mukherjee Balidan-Divas in a big way.

BJP’s Jammu and Kashmir unit chief Ravinder Raina said that Shah will address a rally which will be attended by the Union Minister of State Jitendra Singh and other party leaders.

The BJP MLAs, including former state Ministers who were a part of the PDP-BJP government, will also attend the meeting.

This will be first time since June 19, the BJP national president will present his view points on why and how the PDP-BJP alliance collapsed.

The coalition government of the state’s Peoples Democratic Party and BJP fell on June 19 when latter withdrew support “to protect the national interest.”

Shah’s visit to Jammu was decided about two weeks back but the move to organise a rally was only taken after the saffron party parted ways with Mehbooba Mufti-led PDP.

The BJP-PDP coalition was stitched in 2015. In a statement, party’s media head Anil Baluni said that Shah will be on a day-long trip to the city mark the “historic martyrdom anniversary” of its founder president Syama Prasad Mookerjee.

The meeting of Shah is seen as a build up to prepare the roadmap for the general elections this year.

With indications that the armed forces could be given free hand to pursue hot pursuits against militancy, the saffron party is hopeful that the pro-hardliner voters would be consolidated in its favour.

The reports of disillusionment among BJP workers and supporters were seen as one principal factor that led the saffron party pull out of the coalition with PDP.

BJP leaders, including general secretary Ram Madhav, told media that it had become “untenable” to continue in the collation government.

The refrain from BJP leaders has been that the security forces could not take a ‘harsher’ stand against the militants as former Chief Minister Mehbooba Mufti favoured a kid-glove approach.

“We wanted to deal with the situation strongly,” a party leader said. (UNI)