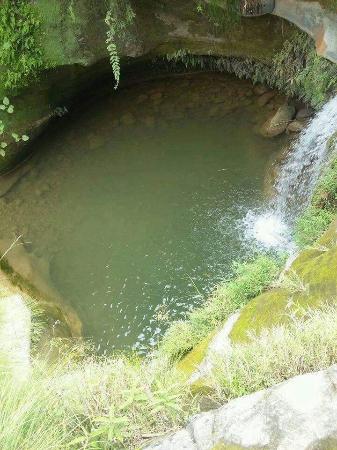 A natural spring of Kashmir

Ganderbal: In a broad day light, mafia allegedly supported by a section of administration including police, encroached upon natural springs and bull dozed concrete baths catering to the public in Wusan village of Central Kashmir’s Ganderbal district.

The locals said the natural springs supplied water to the travelers, villagers and also was used for the bathing purpose.

“Government had also built some baths at the mouth of springs. The land on which baths were constructed belonged to the government,” locals said.

“It was a source of water for everyone. People including travelers used to collect water. The villagers also used to bath there”.

However, the locals said the mafia, aided by a section of administration, brought bulldozers and encroached upon the spring and bull-dozed the concrete baths.

“They took possession of the government land and started constructing a Masjid,” locals said.

“They have denied a natural source of water to the people. It is crime to encroach upon water bodies, but government seems to be in deep slumber”.

The locals said the most shocking part was that a section of administration including police was hand in glove with the mafia.

The Deputy commissioner Ganderbal, Dr Piyush Goyal told The Kashmir Press that they have filed a FIR against the accused who encroached the spring.

“We have lodged a case against the encroachers. We have stopped the work,” he said.

However, when approached police, Station House Officer, Ganderbal, Nisar Ahmad Rah denied that the police have filed a FIR in this case.

“We have not filed a case, but we sent a party to stop the work,” he said.