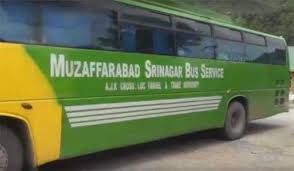 Srinagar: The Karvan-e-Aman bus, operating between Srinagar and Muzaffarabad, capital of Pakistan-administered-Kashmir, left here on Monday.

The bus with only one PaK returnee which left Bemina, Srinagar, has since reached Trade Facilitation Centre (TFC), at Uri.

Sources said more passengers would board the bus before leaving for Kaman post, the last Indian military on this side of the Line of Control (LoC) in Uri sector. The exact number of passengers travelling will be known in the afternoon.

They said the number of passengers coming from PaK will also be known in the evening when the bus from other side reaches the post.

The Cross-LoC bus was introduced for the first time on April 7, 2005 after 1947 to allow families separated due to partition to meet each other.

Thousands of families living on both sides of the LoC have benefited from this Confidence Building Measure (CBM) taken by India and Pakistan who also agreed to allow travel from state subjects from both sides on “Travel Permits” instead of International passports.

However, intelligence agencies from both the countries will have to clear the name of travellers.