Will not give hype to talks with ‘separatists’, will hold deliberations with security grid before deciding extension in ‘ceasefire’: Rajnath

‘Pakistan wants to destabilise India because of its growing economy’ 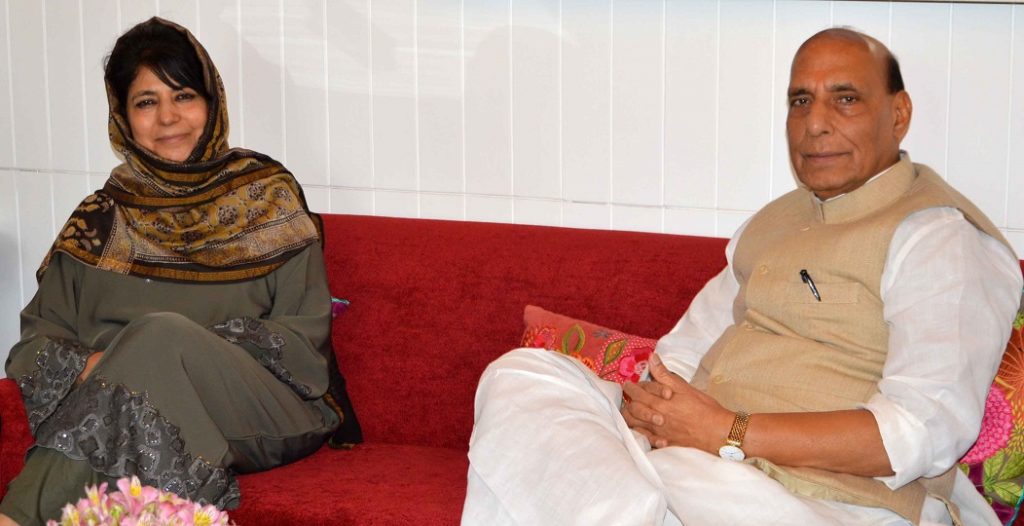 Srinagar: Home minister Rajnath Singh said that the government has decided not to give hype to the talks with “separatist leaders” even as the minister said he would review situation after consulting ‘security establishment’ of the state and the chief minister to reach any conclusion on whether to extend the ‘ceasefire’ or not.

While addressing a press conference at International Convention Centre (SKICC), Home Minister said that dialogue about Kashmir is needed with “right-minded people” and not necessarily with like-minded people to succeed.

“We can talk to anyone. We are open to talks with all. But talks should be for peace. For talks, you need not to speak to like-minded people but it is important to talk to right-minded people,” Rajnath Singh said.

He claimed that Delhi intended to open a dialogue with Kashmiris and as such appointed its special representative Dineshwar Sharma who visited the state 11 times since he was given the assignment in October last year.

“He (Sharma) doesn’t come here on tourist trips. He meets the people of the state to find solutions to their problems. I am sticking to what I said on my first visit to Kashmir (as Home Minister) that we want talks with every section of the society to resolve their problems,” Rajnath said.

Earlier Rajnath Singh had said that Delhi was ready to open talks with the Hurriyat on Kashmir.

In response, Joint Resistance Leadership (JRL) said they were ready to hold dialogue, but Delhi should come clear on its stand with respect to dialogue offer as it was too ambiguous.

Rajnath accused Pakistan of destabilizing India because of its “fastest growing economy.”

Rajnath also hit out at Pakistan for “promoting” militancy in Jammu and Kashmir.

“I would like to repeat that no matter how many obstacles come in our (Centre’s) way, we will not be deterred in our aim to bring lasting peace to Kashmir,” he said.

Referring to resistance leadership, he said that peace in the Kashmir Valley was being disrupted by elements misleading and provoking the youth.

“They (separatists) can play any kind of politics, but they should not play with the future of children, these children are not only the children of Kashmir, but also of India, they are an asset. Keeping this in mind, we took back cases of first time stone pelters,” Rajnath said.

“Giving your children the best of education and handing out stones to the children of others? What is this? I always felt there is a lot of talent in the youth here, IAS, IIM etc results are a proof. Youth are being misguided by certain forces,” he said.

Praising the government forces and Jammu and Kashmir Police, he said;

“I have no hesitation in saying that our security forces, including the army and police, have worked with utmost restraint,” Rajnath said.

Sources said that the police, CRPF, army and intelligence officials briefed Rajnath about the post-ceasefire security situation in Kashmir.

The recent incidents of stone pelting, attacks on security forces in the Kashmir Valley and infiltration attempts along the border figured in the meeting.

Sources said that Rajnaht will stay in Srinagar for night and tomorrow morning will travel to Kupwara where he will review some projects being undertaken as part of the Border Area Development Programme.